Sarah Gardner: Few of us can afford a special-edition car, but your everyday edition? Well, that’s been one of the few bright spots in this economy. Auto sales are up, in part, thanks to cheap credit and strong dealer incentives. Recent numbers show more consumers are taking out longer car loans. Meaning, they pay back the loan over a longer period of time — some up to seven years.

But as Marketplace’s Jeff Tyler explains in this installment of our personal finance series, Money Matters, those long-term loans come at a cost.

Jeff Tyler: Southern California gas station attendant Dallas Highfill earns $9 an hour. He’s on the verge of taking out a seven-year loan for a new car.

Dallas Highfill: I’ve always been a fan of the Mustang. And I finally decided that my current car is no longer suitable. So I want to get a Mustang.

Ladis Sanchez: The 2013 Mustang was redesigned for this year. As you can see, it has a new front end, a new rear end on the vehicle.

And how much does this baby go for?

A $25,000 car is within reach for many consumers, thanks to some strong dealer incentives. Like five-year loans with no interest. But people with low credit scores like Highfill often don’t qualify.

Jessica Caldwell: Some people will not qualify for zero-percent, at all. But, you know, it definitely is a hook that automakers and dealers use to get people into the dealership.

Jessica Caldwell is a senior analyst at Edmunds.com. She’s been tracking a trend. Car buyers are taking loans that can be paid off over a longer period of time. The average loan for a new car has grown to 65 months — more than five years.

Some loans go as long as seven years. Those enable people to make a lower loan payment each month. But the trade off is that the interest payments cost them more in the long run.

Caldwell: I think you’re going to hit the point in five or six years, thinking, ‘Gosh, why did I sign up for this loan?’ But in the short term, you know, you’re getting a nicer car. Probably something you couldn’t afford it you opted for a three to five year loan. And, for a lot of people, it just makes sense.

Dallas Highfill knows the seven-year loan will cost more. But he thinks it’s worth it to get his dream car.

Highfill: It’s that or get a 1993 — ha ha — Corolla, or something. Because I’m not going to be able to afford anything in cash for years.

According to his budget, a seven-year loan will leave him enough money each month to pay for auto insurance. 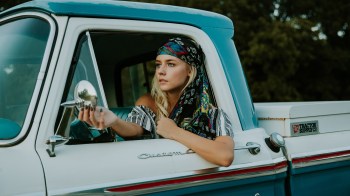