Stacey Vanek Smith: An outbreak of the rare hantavirus at Yosemite National Park has killed three people, and spooked a lot of would-be tourists.

Sarah Gardner has more now on how the park is being affected.

Sarah Gardner: Parks officials are tracing all but one of the eight hantavirus cases to mice infestations in one particular corner of the park: Yosemite’s signature tent cabins in Curry Village. But the third person who died of the pulmonary virus camped in a different section.

Health officials are now alerting at least 22,000 people who stayed in Yosemite this summer they may be at risk. Some nervous tourists are cancelling visits. The park lost 20 percent of its Labor Day weekend reservations according to Yosemite’s lodging concessionaire.

The tourism business outside the park’s been affected too. Liz Skelton owns the Yosemite Blue Butterfly Inn.

Liz Skelton: It’s even affected some of the people in Mariposa, in the town of Mariposa. We’ve had some of the bed and breakfast people say that they’ve had cancellations.

Skelton says she’s only had one cancellation. It was from a woman in Singapore. 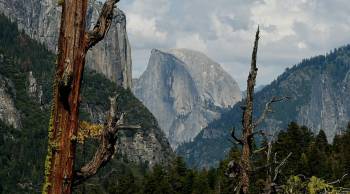