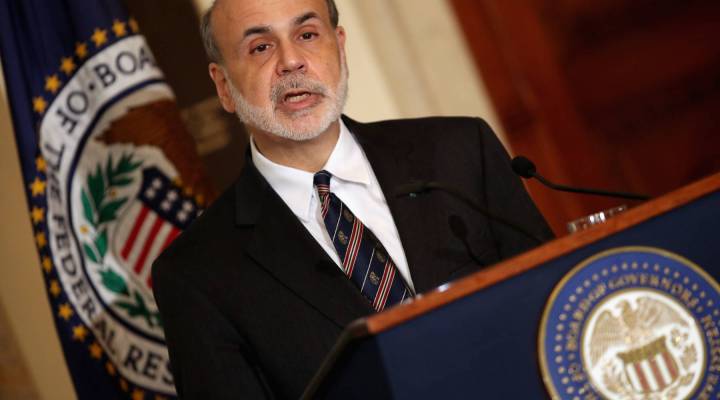 Will the Federal Reserve step in, again?

COPY
Federal Reserve Chairman Ben Bernanke, who on Wednesday held his last scheduled news conference after the Fed announced it will scale back on bond buying. Chip Somodevilla/Getty Images

Will the Federal Reserve step in, again?

Federal Reserve Chairman Ben Bernanke, who on Wednesday held his last scheduled news conference after the Fed announced it will scale back on bond buying. Chip Somodevilla/Getty Images
Listen Now

All eyes are on the Federal Reserve this week ahead of its two-day meeting Wednesday. The big question on many economists’ minds? Will the Fed announce another round of economic stimulus or stay on the sidelines?

Julia Coronado, chief economist at BNP Paribas, joined us to discuss the Fed’s next move. She predicted that it will continue pumping more money into the U.S. economy, using an action known as quantitative easing.

“The progress to date on the economy has just been disappointing yet again, and so it seems as though they have decided it’s now time to act,” Coronado said. “We expect [the Fed] to announce another round of quantitative easing, in which they buy treasuries and mortgages in an effort to keep interest rates low and stimulate the economy.”

Some economists have said the Fed might hold off on action because of the presidential election. But under the Federal Reserve Act, the Fed is required to take action and stimulate the economy, Coronado noted.

“If they held off because of the presidential election, that might actually look more political,” she said. “The unemployment rate has barely budged this year. They’re just not making progress on their mandate to keep maximum sustainable employment.