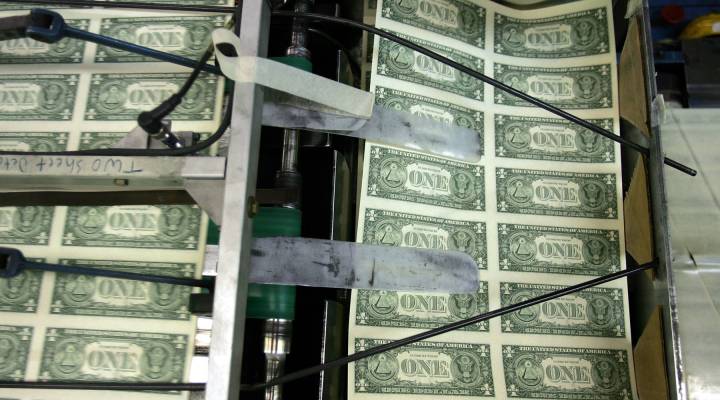 One dollar bills as they are printed and prepared for distribution to financial institutions at the Department of the Treasury Bureau of Engraving and Printing in Washington, D.C. Today's gloomy jobs report makes another round of quantitative easing a lot more likely. Joe Raedle/Getty Images
Whiteboard

One dollar bills as they are printed and prepared for distribution to financial institutions at the Department of the Treasury Bureau of Engraving and Printing in Washington, D.C. Today's gloomy jobs report makes another round of quantitative easing a lot more likely. Joe Raedle/Getty Images

Yesterday, the European Central Bank announced it will print as much money as it needs to keep the euro together. Today, a depressing jobs report puts pressure on the Federal Reserve to do the same, using so-called quantitative easing for the third time — in order to juice our sputtering economic recovery.

Never mind the fact that the monthly jobs report is deeply flawed and never accurate. It moves markets and it could twist the arm of the Federal Reserve, which you’ll recall, has two mandates: to keep inflation down and employment up. The unemployment number is falling, but only because people are falling off the rolls and not being counted. In other words, the real percentage of unemployed people in the U.S. is much higher than 8.1 percent, and it’s actually rising.

So there’s one big argument for QE3, as they’re calling it. The danger of QE — which is really just the act of printing money  and flooding the system with it — is that all that excess cash could cause inflation. But advocates for rolling the printing presses will make the point that this would be the third round of QE: the first two rounds pumped more than $2 trillion into the economy, and the inflation needle has barely budged. Hence the second argument for QE3: right now, it seems to be safe. As for the other arguments, that the excess cash could endanger the dollar, or make it more expensie for us to borrow —  again, the proponents of another round of QE will say the two injections haven’t had any obvious negative effects.

So stand by to watch the Fed strap in, say a quick prayer, and print away!

Oh, by the way, if you’re still confused by QE and want an explanation, here’s a Whiteboard!

Why there's a flood of new stock market investors