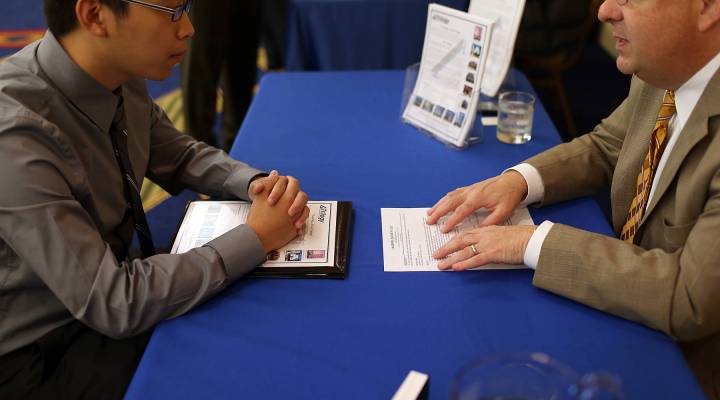 Stacey Vanek Smith: Employment numbers for August came out this morning: 96,000 jobs were created last month. That’s far less than was forecast. The unemployment rate did tick down a bit to 8.1 percent, but that was reportedly because more people have dropped out of the workforce. Employment numbers for June and July were revised downwards as well.

Alan Krueger is President Obama’s chairman of the Council of Economic Advisers. What is your reaction from this report?

Alan Krueger: Every month, when the numbers come in, I try to take a step back and look at the bigger picture. The monthly numbers tend to be volatile, they can be revised substantially month-to-month. And I think we see a picture of an economy that’s continuing to heal from the very deep wounds from the Great Recession that began at the end of 2007. We now have had 30 months in a row of private sector job growth; 4.6 million jobs added over that period. More needs to be done, particularly given the size of the deep hole. We lost 4.5 million jobs in year before President Obama came to office. But the economy is headed in the right direction. There are steps that the president has proposed that would strengthen job growth right now, and I think that would help to strengthen the economy and help this healing process to continue.

Vanek Smith: In a speech last night, the president set a goal to create a million manufacturing jobs. It turns out we lost about 15,000 manufacturing jobs in August.. Did you find that surprising? Did that catch you off guard?

Vanek Smith: Are we still on track potentially to add a million manufacturing jobs?

Krueger: Oh, I think if the proposals that the president has made are enacted, that will lead to a million manufacturing jobs as he said as a goal last night. He has a very robust agenda for manufacturing, including creating institutes of manufacturing innovation, which will combine university researchers, community colleges to train workers, companies, entrepreneurs the lab system. And we have set up one of these institutes using funds that were available administratively, and the president has requested funds for up to 13 of those. So I think that’s something that can change the manufacturing landscape for example.

Vanek Smith: We’re continuing to see a lot of people becoming discouraged and dropping out of the workforce. Is that becoming a larger concern?

Krueger: Actually, if you look at last month, the number of discouraged workers ticked down a little bit. The trend in the U.S. has been for a decline in labor force participation, which began before President Obama came to office. This is partly demographics. We have an older workforce, we’re going to see more people retire in the future. What’s most important is to keep our eye on job creation. We need to make sure that the kind of job growth that we’ve had continues, and we want to see that strengthen. That’s why the president has been committed to creating more jobs in manufacturing, that’s why he’s asked Congress for funds to invest more in infrastructure, to help schools keep teachers on the job, and towns keep first responders and police officers. That’s why he wants to extend the middle class tax cuts, to provide more certainty for the middle class families, that’s why he wants to help families refinance their mortgage.