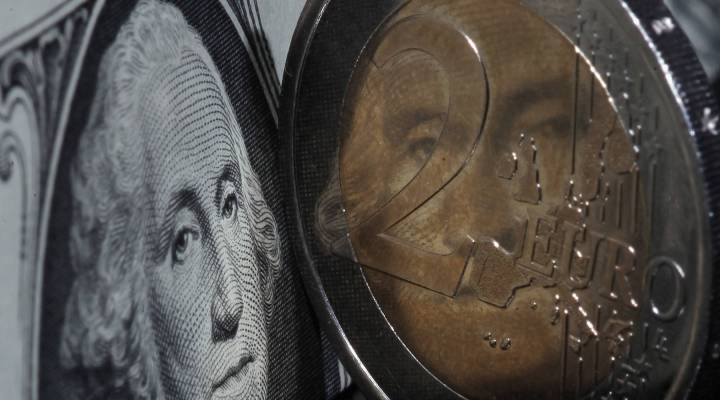 Europe’s big bond bet and what it means for the U.S.

Europe’s big bond bet and what it means for the U.S.

A two Euro coin rest in front of a U.S. dollar. Europe will likely announce a big bond-buying program tomorrow. The U.S. Fed will be watching. Dan Kitwood/Getty Images

There’s a big meeting of the European Central Bank tomorrow. Bankers and politicians expect the ECB to announce its intention to buy huge amounts of bonds from various troubled nations in the eurozone, in order to keep them solvent and in the common currency. The Federal Reserve will be watching to see the size of the program and gauge its possible effects. If Europe continues to struggle, and the Fed gets worried about the impact on the U.S., it could embark on its own round of bond-buying. This would be Quantitative Easing of the third kind (you can watch a Whiteboard explaining QE here).

Those who like to spend their time poring over tea leaves in an effort to divine what the Fed might do are split right now. Some see credit easing, homes and cars selling and a light at the end of the long tunnel we’ve been in these last few years — they argue we don’t need and won’t get what one pundit recently called “the empty sugar high” of QE3. Others see the stubbornly high unemployment rate, still above 8 percent, and they note the Fed’s mandate to keep unemployment in check — that’s enough to justify printing more money, they say.

And then of course there’s the view that the positive effects of QE3 have already been spent. In this theory, printing money is a bit like injecting heroin: the more you do it, the less effect it has, and in our case all the good effects of a liquidity injection have already been used up, in QE1 and QE2.

So put the needle away, Ben. Chances are, it’s not going to make us feel any better!