Let’s look at the all-important consumer, who was in a spending mood last month. The government said this morning that consumer spending grew 0.4 percent last month. That’s the fastest pace in 5 months.

For more on this, let’s bring in Mellody Hobson — no relation to me. She’s president of Ariel Investments and she spoke to us from Chicago. She’s says this indicator is a big deal because the consumer represents two-thirds of GDP.

She says the latest numbers are encouraging, despite persistent negative economic factors, including the European debt crisis and the coming so-called fiscal cliff.

“There’s no question there are headwinds,” Hobson says. “But there’s also the back-to-school season, which is upon us and is probably partially tied to that uptick in spending. And that should continue in the early weeks of September as well.

“I think at the end of the day, people got really concerned in late spring and early summer as they saw things heat up in Europe, and they pulled in their horns. But they saw the world didn’t come to an end and probably feel better and may continue on this spending path because of that.” 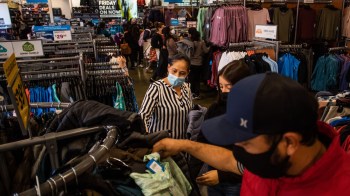