Kai Ryssdal: Lest you thought the traditional summertime wedding season is drawing to a close, Wall Street has other ideas. The private equity firm Clayton, Dubilier and Rice has proposed to David’s Bridal. The deal values the wedding dress retailer at a just a hair over a billion dollars. Urban Outfitters and Ann Taylor are getting into the wedding biz as well.

Sally Herships has more on the sudden retail popularity of getting hitched.

Sally Herships: I have a question for you: Ball gown or mermaid? Lace or satin?

Anja Winikka: It’s one of the most stared at, looked at pieces of clothing that a woman wears in her entire lifetime.

And then there are the pictures. Forever. But no pressure.

Nancy Koehn: Americans historically have a spent a lot of money on weddings.

Nancy Koehn is a retail historian at Harvard.

And the average bride spends $1,100 on her dress. Koehn says even though an awful lot of Americans get divorced, we still love getting married. But the wedding industry has not exactly been in a honeymoon period lately.

Shane McMurray: No, the industry is definitely not recession proof.

Shane McMurray is CEO of the Wedding Report. He says when the recession hit people cut way back on weddings. But Anja Winikka says within the bridal industry fashion is worth $4 billion. In the wedding business, the trusted life partner, is the dress.

Shane McMurray: If they’re going down to the courthouse, or to the JP or whatever, it doesn’t matter. Even if they go down to some shop at the mall or something and it’s not necessarily a full blown wedding dress they’re going to buy a dress.

How romantic.  That’s why so many retailers are lining their racks with white. And don’t forget dresses for the bridesmaids — do you have anything in sea foam? Or guava? 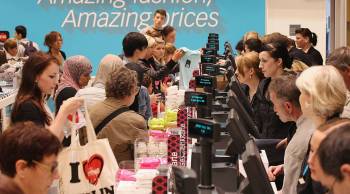 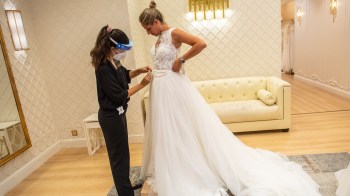