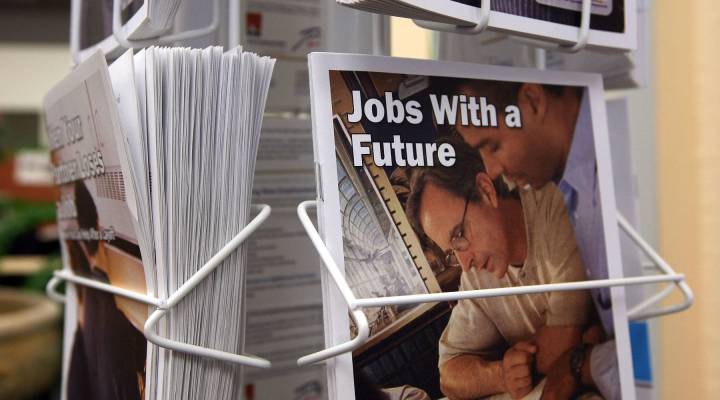 COPY
Employment pamphlets. Author DW Gibson on what he learned traveling across the country talking with the unemployed for his new book, "Not Working," and one of the book's subjects, Bridgette Lacy, discusses what it's like to be jobless. Justin Sullivan/Getty Images
Shelf Life

Employment pamphlets. Author DW Gibson on what he learned traveling across the country talking with the unemployed for his new book, "Not Working," and one of the book's subjects, Bridgette Lacy, discusses what it's like to be jobless. Justin Sullivan/Getty Images
Listen Now

Tess Vigeland: Being unemployed in this economy has its obvious problems. What’s not so obvious are the solutions. DW Gibson’s new book, “Not Working,” is a collection of interviews with people who lost their jobs because of the recession and found new ways to adapt. DW, thank you for joining us.

DW Gibson: Thank you for having me.

Vigeland: So you traveled across the country and talked to people who lost their jobs and yet there is a lot of hope in this book, were you surprised by that?

Gibson: I was surprised by that, pleasantly surprised by that. I think a lot of the hope is in folks who find a way to reconfigure their life, to sort of take a step back from where they were and instead of looking for a way to slip right back into that slot where they were making X amount of dollars, to take a step back and look at what they can do reclaim their life — the things they can do to save money and not necessarily live with less, but sort of reclaim the activities they do that define who they are.

Vigeland: Did some of that, though, depend on how long they had been unemployed, I would guess?

Gibson: Yes. I think that there are definitely a lot of stages, if you will, that people experience in their own timing. People talk about an initial optimism that they experience sort of in the immediate aftermath of the layoff. And then they sort of settle into something if it’s been months — and in some cases years — I think there’s a total range of emotion that goes on for the long-term unemployed.

Vigeland: Well we have one of your subjects also in the studio with you, Bridgette Lacy. Welcome to the program.

Vigeland: Talk to us about your layoff.

Lacy: What happened was I initially was a journalist at the The News & Observer in Raleigh. And they were laying off and so I was offered a position at state government. I accepted that position as the media relations for the North Carolina Arts Council, thinking the state government would be kind of safer than newspapers. So after two years and six months, I was then laid off as a part of reduction in force.

Vigeland: You talk about going to an unemploymen workshop and getting some pretty, shall we say, unhelpful advice. What was some of that?

Lacy: Well, there was this little guy. I always, I think, preface it with “little” because he was physically small, but I thought his mind was small, too. He was saying things like “stop getting your hair done,” “don’t go the manicurist.” That just kind of felt like, almost comedic. It was like like that’s not real advice. If I have to choose between paying my credit card and my house note or my car note, what should I choose and why? I wanted more kind of hands-on advice like that that seemedpractical.

Vigeland: Well DW, based on all your conversations with all these people around the country, do we have an unemployment system that is helpful?

Gibson: It’s funny. People across the board — whatever sort of political affinities they expressed — spoke about disappointment in political leadership across the spectrum, not about this party or that, across the spectrum. And articulated a hunger for a jobs program, an opportunity to recieve support from the government that wasn’t for the fact that they didn’t have a job, but for the fact that they were doing a job that the government had given them. So there’s a real appetite out there, I think, for a jobs program across the political spectrum within the citizenry and that’s what really stood out to me in a lot of these conversations.

Vigeland: Well Bridgette, do we have a happy ending for you?

Lacy: So far it has been a happy ending or maybe I’ll say a new beginning because you were asking about resources — Raleigh Wake Tech Community College offers what they call human resource development classes and these classes are free for the unemployed and the underemployed. I’ve been taken classes in online social media and LinkedIn. There are a lot of great courses there to kind of help you revamp yourself or reinvent yourself.

Vigeland: So are you still searching for a full-time job?

Vigeland: All right, well best of luck with that.

Vigeland: DW Gibson is the author of “Not Working,” a series of stories from across the country of people who have been unemployed and one of his subjects was Bridgette Lacy, who has also joined us. Thank you both.

Gibson: Thanks for having us.