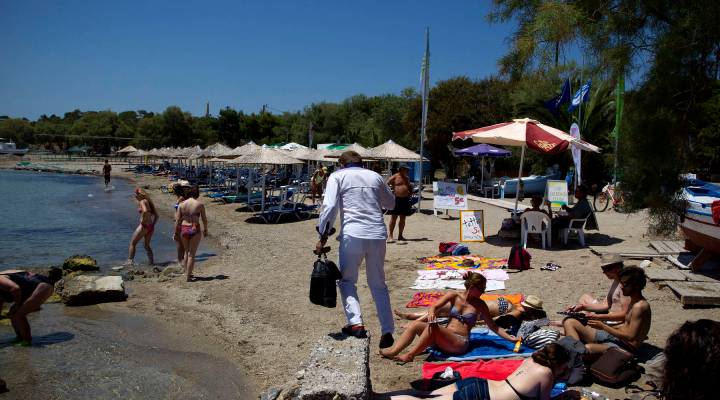 No vacation from euro debt crisis in Greece

COPY
It's vacation time across Europe, but it's not all sunshine for Greeks. The debt-laden nation has fallen behind in implementing reforms and austerity measures. Takis Takatos/AFP/Getty Images
European Debt Crisis

No vacation from euro debt crisis in Greece

It's vacation time across Europe, but it's not all sunshine for Greeks. The debt-laden nation has fallen behind in implementing reforms and austerity measures. Takis Takatos/AFP/Getty Images
Listen Now

Tess Vigeland: It’s vacation time in Europe, but Greek ministers are not in holiday mood. Today they’re meeting to hash out billions more dollars in spending cuts demanded by their European partners as a condition of getting more bailout money. The Greeks have fallen behind in implementing reforms and austerity measures. With us from Thessaloniki, Greece’s second city, is Marios Efthymiopoulous. He’s with the research firm Strategy International. Welcome.

Vigeland: So it is vacation season there in Greece and throughout Europe. Are Greeks thinking about the economic crisis or vacation?

Vigeland: Yeah. Are there many tourists from outside of Greece there?

Efthymiopoulous: Foreign tourists are coming to Greece, but of course they’re much lower numbers than they were last year or two years ago.

Vigeland: Any speculation on why that is? Why aren’t people there?

Efthymiopoulous: I think it’s the negative attitude between everybody and this climate that has been developing for the last year and a half. It has brought Greece basically to a standstill to what has to do with tourism. There are those that are coming every year in Greece and they keep on coming because they kind of like it. So they don’t care what is told, they don’t care what is going on, they just care to have a nice time in Greece and relaxing.

Vigeland: Before the summer we talked to one man in Greece who said there would be “blood in the streets” if Greeks had to go through austerity. Certainly there was some rioting a while ago, but it seems like things have settled down, society has certainly not broken down. Why is that? Have Greeks just resigned themselves to this as a fact?

Efthymiopoulous: When Greeks are told to decide either left or right, or up or down, they kind of take it there and back in their own way. We have this tendency of getting it to the extreme that if something is going to happen then the world will erupt, we’ll take the guns and hit the streets and so on and so forth, this of course did not happen.

Vigeland: As you know, yesterday the German finance minister said that Germany would like to help, but cannot be throwing money into a bottomless pit. I can’t imagine Greeks are terribly happy about being called a bottomless pit.

Efthymiopoulous: Greeks don’t take it well, but to be honest they have also a right to feel like this because the messages from Greece that are taken outside are mixed. There’s not clear position and opinion, there are not clear statements on what they would like to do. Me personally, as a Greek, I would like to see Greece deciding for one objective and going towards this. What will you export? What will you provide as services? How will you be identified to the international community? That is a question that Greece has not faced since its entrance into the European Union.

Vigeland: Marios Efthymiopoulous is with Strategy International and we spoke with him from the city of Thessaloniki. Thank you so much.