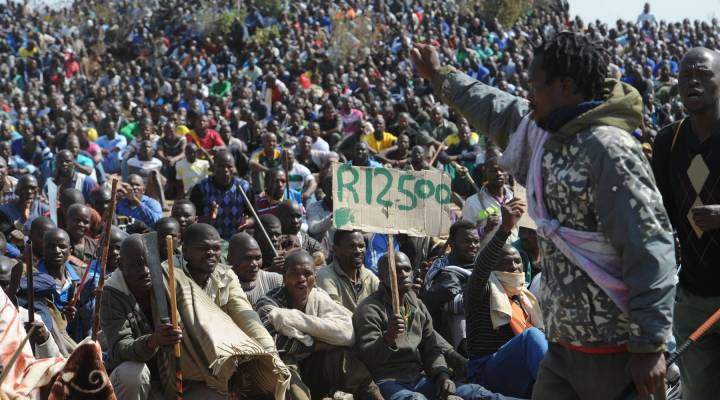 COPY
Miners sit together during a strike calling for increased wages, at a platinum mine in Marikana on August 16, 2012. STRINGER/AFP/GettyImages
Mid-day Update

Miners sit together during a strike calling for increased wages, at a platinum mine in Marikana on August 16, 2012. STRINGER/AFP/GettyImages
Listen Now

A mass shooting of platinum miners in South Africa is a reminder that our precious metals come from some pretty unstable places. A dispute between two feuding unions at the mine in Marikana turned against police, who then reportedly killed 30 miners in the chaos.

European markets moved higher today after German Chancellor Angela Merkel said she stands behind the European Central Bank. The head of the ECB raised hopes a few weeks ago by promising to do “whatever it takes” to preserve the Euro. The truth is, ECB action is heavily dependent on German support.

There’s word this morning that the Treasury Department is going to revamp its financial relationship with the mortgage giants Fannie Mae and Freddie Mac. Ever since being bailed out by the government four years ago — Fannie and Freddie have been making quarterly 10 percent dividend payments to Uncle Sam — even if they have to borrow money to do so. The new plan would require the firms to turn over all of their profits to the government but pay nothing when they’re unprofitable.

There’s been an outbreak of West Nile virus in Texas. Dallas County has seen nearly 200 cases of the mosquito born illness, and ten deaths. That’s led the Dallas mayor to authorize the first aerial spraying of pesticides in that city since the 1960’s.

President Obama has launched a new campaign ad defending his record on Medicare. He’s come under attack from the Romney campaign for taking hundreds of billions of dollars out of Medicare to pay for the Affordable Care Act. At the same time, of course, President Obama has attacked Romney’s running mate Paul Ryan for his plans to cut Medicare.

Well, it’s Friday, which for some people means it’s Casual Friday. But where did Casual Friday come from? We tell you. Plus, you’ve got to check out the 1992 Dockers ad campaign that was sent to 25,000 HR managers offering tips on the emerging workplace trend dubbed “Business Casual.” Among the tips: “Keep wrinkled, stained or dirty clothing out of the workplace… Sleeveless shirts and tank tops are inappropriate.”