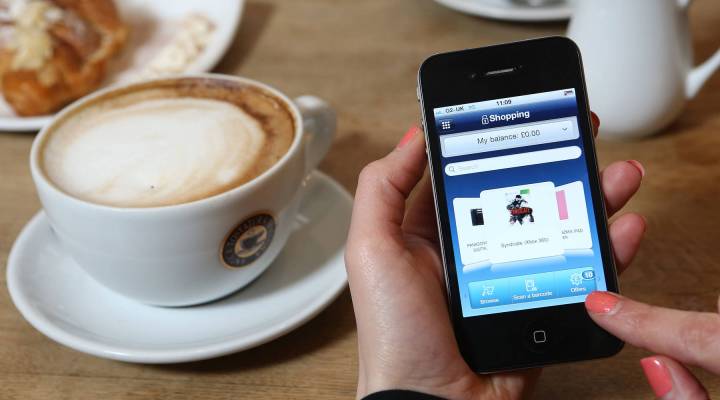 COPY
A digital wallet service. Wal-Mart is teaming up with other big retailers to offer a mobile payments network. Tim Whitby/Getty Images for O2
Mid-day Update

A digital wallet service. Wal-Mart is teaming up with other big retailers to offer a mobile payments network. Tim Whitby/Getty Images for O2
Listen Now

Greece’s current government took power in June — since then the world’s been waiting for the specific plan to break the stalemate with its European creditors. This morning, we may have a glimpse of it. The Financial Times says it has seen the plan Greece’s prime minister will bring to the table next week with German and French leaders.

The government said this morning that consumer prices were flat last month compared with the month of June, which were unchanged from May.

Farm Equipment maker Deere & Co.’s missed expectations with its quarterly earnings report this morning, but the company says the drought could actually help its bottom line — as farmers upgrade to equipment with the latest technology. Staples and Target also reported earnings.

Now to Brazil, which has been a bright spot in the global economy in recent years. But things are starting to slow down — so today the government is launching a stimulus package of sorts.

Today, Australia’s highest court ruled the government there can go ahead with plans to force tobacco companies to sell cigarettes with nothing but a plain package — no branding at all, just those graphic warnings that say tobacco can kill you.

Our latest reporting on U.S. consumer confidence says it jumped up last month. But the U.S. is a collection of a lot of smaller economies. When you break it down state-by-state, what do you find?

Remember when every store seemed to be pestering you to sign you up for a credit card so you would shop there more? Now, it seems like every store wants to sign you up for their smartphone app. We’ve got news this morning that a group of major retailers, including Wal-Mart, Target and 7-Eleven, are teaming up to create their own network for mobile payments. It’s one more way for retails to draw you closer — and get a jump on outsiders, like Google. And speaking of Wal-Mart, its business has been on an upswing. But is it true that as goes the nation’s biggest retailer, so goes the nation’s economy?

And in Hartford, Conn., a lady named Grace Edwards was trying to sell the house she’s lived in for 25 years when a potential buyer asked for a history of her utility charges. That’s when she discovered she’s been paying to power two of the street lights in her subdivision. According to the Hartford Courant, the original builder had agreed to pay those charges, but Grace Edwards had not. So she now has a check from the electric company for $10,491.21.