Jeff Horwich: The housing crisis is still far from over, but the real estate market is heating up again across the country. With home prices climbing, it makes you wonder what ever happened to all that “shadow inventory” of foreclosed homes we heard so much about.

Shannon Mullen: The thing about a shadow — it can look a lot scarier than the object that’s casting it.

Daren Blomquist: The big elephant in the room of shadow inventory has gone on a diet over the last 18 months.

Daren Blomquist is vice president ofRealtyTrak, a website that counts and marketsforeclosure properties. He says some analysts worried up to 10 million delinquent mortgages, foreclosures, and bank-owned homes would hover off-the-market indefinitely, depressing prices and prospective buyers.

Blomquist: The doomsday scenario hasn’t played out yet.

Instead, shadow inventory peaked at just over 2 million homes in 2008, and now the tracking firm CoreLogic says it’s down to 1.5 million. Blomquist says, No. 1, banks are helpingmore homeowners avoid foreclosure. Some lenders don’t have a choice, thanks growing state and federal pressure. And turns out keeping people in their homes can also be better for a bank’s bottom line.

Kathleen Beaulieu: The letter of suspension when we suspended the foreclosure, that’s all in here, legal bills.

At The Savings Bank in Wakefield, Mass., senior loan officer Kathleen Beaulieu rifles through a thick file for a delinquentloan she recently modified.

Beaulieu: We’re not in the real estate business,we’re in the money business. The bank does not make any money by foreclosing on somebody’s home and selling the property.

But banks are increasingly lettingpeople sell homes worth less than they owe. That’s because more buyers are looking for bargains, including investors who buy in bulk. So short sales are up, while foreclosure filings are down year over year. But RealtyTrac’s Daren Blomquist says nearly 13 million borrowers are still underwater.

Blomquist: Right now those homeowners are behaving well, making their mortgage payments, the vast majority of them.

If they stay current as the economy grows, Blomquist says there won’t be much of a shadow left to keep the housing market from really heating up. 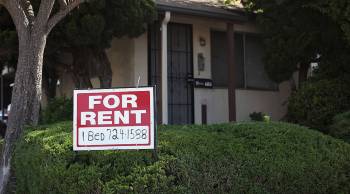