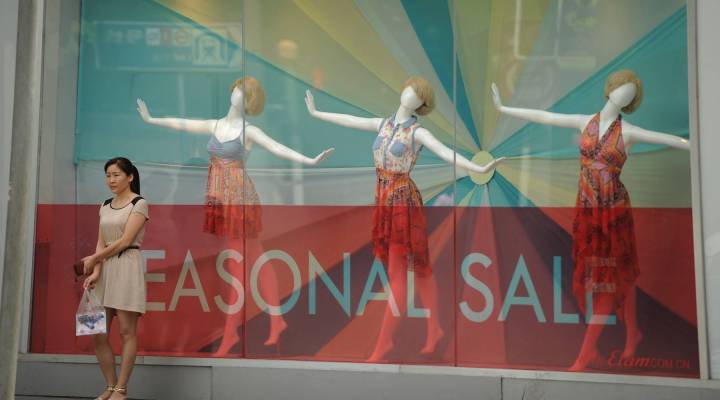 COPY
A woman stands outside a retail store along a street in Shanghai on July 25, 2012. PETER PARKS/AFP/GettyImages
Mid-day Update

A woman stands outside a retail store along a street in Shanghai on July 25, 2012. PETER PARKS/AFP/GettyImages
Listen Now

The scandal over British bank Standard Chartered is taking some interesting turns. This week New York’s financial regulator charged the bank with concealing transactions for Iranian clients — breaking U.S. sanctions against Iran. Standard Chartered could lose its New York license, which would be devastating. The affair is diverging from the storyline of other recent British banking investigations.

The latest economic data out of China show a continued economic slowdown there. New numbers on factory output and retail sales came in below expectations this morning.

The world could face the worst food crisis in five years if countries like the U.S. start restricting exports of agricultural products. That’s according to the U.N.’s Food and Agriculture Organization, which says bad weather is causing a spike in global food prices. That could be made worse if countries stockpile.

Some new figures from the Brewers Association show these are frothy times for the beer industry. The total number of U.S. breweries in June was 2,126, which is the most since the year 1887. Beer sales, on the other hand, are up just 1 percent this year. And according to the Denver Post, that growth is due mostly to the fact this is a leap year — which means there was one extra day for beer drinking.

The big defense contractors — including Lockheed Martin and Pratt & Whitney — say they may have to send out mass layoff notices to their employees in a few months. That’s because they’re worried that hundreds of billions of dollars in expected cuts to the Pentagon’s budget will have a big effect on them.

The NFL’s preseason is underway. Do you bother? For the teams, this is warm-up time — these games don’t count. But when the Chargers and the Packers take the field tonight in San Diego they’ll be part of football history: They’ll be the first NFL teams to be refereed by a woman.

To Blaine, Wash. where a state trooper rescued an injured seagull he found in the middle of I-5. But when he put the bird into his cruiser to take it to a wildlife center, he got called upon to help a fellow officer. The seagull got to experience a ride-along, and the officer didn’t tell the local TV station KOMO if the seagull left any thank you gifts in the back seat for him.