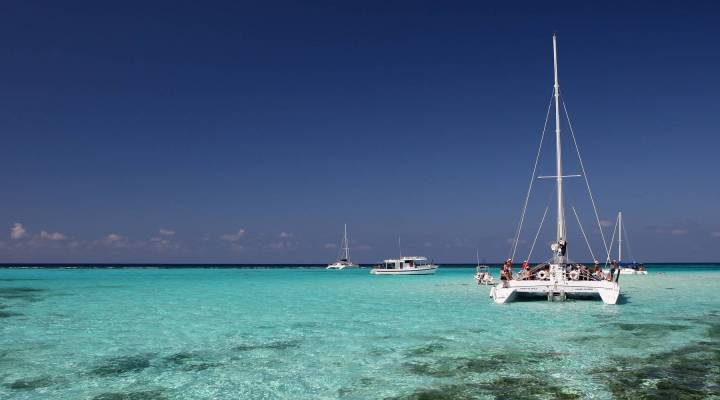 COPY
A ship navigates on the Mediterranean sea on May 25, 2010 south of the island of Malta. ANDREAS SOLARO/AFP/Getty Images
Mid-day Update

A ship navigates on the Mediterranean sea on May 25, 2010 south of the island of Malta. ANDREAS SOLARO/AFP/Getty Images
Listen Now

The NASA rover Curiosity landed on the surface of the red planet late last night. And it was all hugs at NASA’s Jet Propulsion Lab in California. That’s because it took a lot of work — and money — to make this moment possible.

Best Buy shares are up 15 percent so far this morning after the company’s founder said he wants to take Best Buy private by buying up all of its shares.

Looks like NBC will sell enough ads to break even on the London summer games, which cost $1.3 billion. Its Olympic-sized audience is also a great place to tout NBC programming.

Facebook CEO Mark Zuckerberg has dropped off Bloomberg’s top 10 list of the richest tech billionaires. The reason is that shares of Facebook are near record low. If you’re wondering, as of today Mark Zuckerberg sits at number 24 on Forbes’ overall list of global billionaires — one spot below Steve Jobs’ widow, Laurene Powell Jobs. The founders of Google and Amazon just miss the top 10. Within that top 10, four are Waltons — heirs to the Wal-Mart fortune. The world’s richest man — by a good bit — is Mexican telecom magnate Carlos Slim.

While we’re sharing lists — the scientific journal Lancet has released a list of the laziest countries in the world measured by the amount of physical activity that the people in each country do. And the winner — or loser, I guess you could say — is Malta. The Mediterranean island nation’s population is 72 percent inactive. The least lazy country, according to Lancet is Greece, because while the Greeks have trouble paying the bills, only 15 percent of them lead sedentary lifestyles.

Congress has left Washington for for its August recess, and still no firm plans to avoid the so-called fiscal cliff of spending cuts and tax increases due to go into effect at the end of this year.

When I think Cayman Islands, I think of beaches, island breezes, and tax-havens. The British territory has 91,000 registered companies including 235 banks. But now, because of pressure to plug a budget hole, the government is proposing a 10 percent income tax on foreign workers.

Southwest Airlines does its seating on a first-come, first-served basis. And that wasn’t good enough for one high school junior
named Mac Breedlove, who was on his way to a lacrosse tournament. According to CBS News, he decided to skip the line
to get a better seat. Well his coaches were on board, and they coordinated with the airline crew. And Breedlove had to go to the front of the plane and apologize to all the passengers. He says he’s learned a valuable life lesson: just be patient.