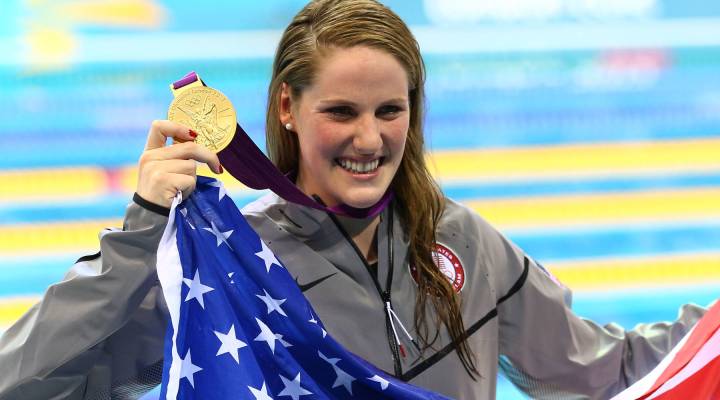 PODCAST: Up on household incomes, down on NBC

COPY
Missy Franklin of the United States celebrates with her gold medal and an American flag during the medal ceremony for the Women's 100m Backstroke on Day 3 of the London 2012 Olympic Games at the Aquatics Centre on July 30, 2012 in London, England. Al Bello/Getty Images
Mid-day Update

PODCAST: Up on household incomes, down on NBC

Missy Franklin of the United States celebrates with her gold medal and an American flag during the medal ceremony for the Women's 100m Backstroke on Day 3 of the London 2012 Olympic Games at the Aquatics Centre on July 30, 2012 in London, England. Al Bello/Getty Images
Listen Now

The British oil giant BP has shocked investors with a sharp fall in profits. The company made $238 million in the last quarter. That compares with a profit of $5.4 billion for the same period last year. The Gulf of Mexico oil spill in 2010 was only partly to blame.

The other big news this morning is out of India, where 600 million people lost power this morning. It’s the second major blackout there in just two days.

The government said that household income jumped a half percent last month — but consumer spending fell by 1 tenth of a percent when adjusted for price inflation. And the drug company Pfizer reported higher-than-expected quarterly earnings. The company says it improved its bottom line by saving money on research and marketing. The company’s planning on spinning off its veterinary unit into a separate company.

The U.S. economy may still be struggling, but car sales are staying the course. For one thing, there’s pent-up demand. New launches are luring customers into dealer showrooms. And more banks are allowing dealerships to close the deal.

Yesterday on the show — as part of our coverage of Wealth and Poverty issues — we spoke with President Obama’s former top economic advisor Larry Summers. We talked about inequality, which has become a central issue to the presidential campaign this year. Well for another view, we talk with Arthur Brooks, president of the American Enterprise Institute, a conservative think-tank in Washington.

Food prices are on the rise, and the BBC has played out the consequences for what we eat 20 years from now. Insects will be a big part of our diets. And if you want to go vegetarian, can I interest you in some algae? Scientists say with 10,000 different types of seaweed in the world there’s sure to be one for you.

Onto Olympics news. If you missed it, NBC last night played right into its critics’ hands by airing a “Today” show promo in primetime, spoiling swimmer Missy Franklin’s win in the 100 meter backstroke.

The U.S. Olympic Men’s basketball team crushed France in its opening game. Tonight it takes on that well-known basketball powerhouse, Tunisia. It’s been 20 years since the first U.S. “Dream Team” changed Olympic competition forever. In 1992, for the first time, a rule change allowed NBA pros on the court, rather than the best amateurs culled from college teams.

When it comes to “going for the gold” in London, shiny medals aren’t the only reward. Athletes’ Olympic success can lead to big-money endorsements. The high-performance competition can also, it seems, be a gateway… to Wall Street.

If you ever win an Olympic medal — even a bronze one — please don’t take it into the shower with you. That’s what a Brazilian athlete did and then dropped it, dented it, and broke the string so he can’t wear it around his neck. He asked for a new one and the International Olympic Committee has reportedly granted his request. Hopefully they sent him a rubber ducky as well, so he doesn’t have to take his medal with him into the shower anymore.