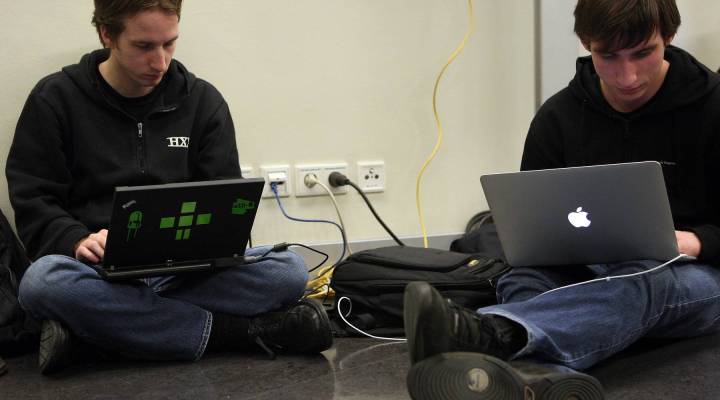 Stacey Vanek Smith: Computer hackers took over Las Vegas this week as part of the Black Hat conference. Black Hat is a gathering of hackers where they talk about the latest in security and security breaches.

Kim Zetter is a senior reporter for Wired. She was at the conference. Good morning Kim.

Smith: So this is year 15 of the Black Hat conference, how has the conference changed since you’ve been going?

Zetter: It’s gotten more diverse. It used to be quite a lot of security professionals. It’s expanded. A lot of researchers are presenting, there are some hackers. A lot more people from different various federal agencies show up: DHS, law enforcement, things like that.

Smith: So who is at Black Hat? Is it hacktivists or criminal hackers or all of the above?

Zetter: Black Hat is much more oriented towards the professional crowd; these are the people who are actually defending systems. So, these are security administrators and researchers who are looking into the vulnerabilities in systems. So, it’s kind of a different crowd in that sense. Not too many hackers at Black Hat.

Smith: What are some of the big issues coming up at Black Hat this year? Is there anything everybody’s talking about?

Zetter: There are a couple of interesting stories that have gotten some press. One of them that I found particularly interesting was an attack on vulnerabilities in key cards locks in hotels. What they found was there is a port at the bottom of the lock on your door and anyone can actually plug into the port and read data on the lock and unlock the lock. So that was an interesting one.

Another interesting one that I found was the vulnerabilities with iris recognition systems that involved actually creating a synthetic image that would match the real iris image that someone had taken. In that way someone could create an image and steal the identity of someone based on their iris.

Smith: Kim Zetter is a senior reporter for Wired. Kim, thank you.