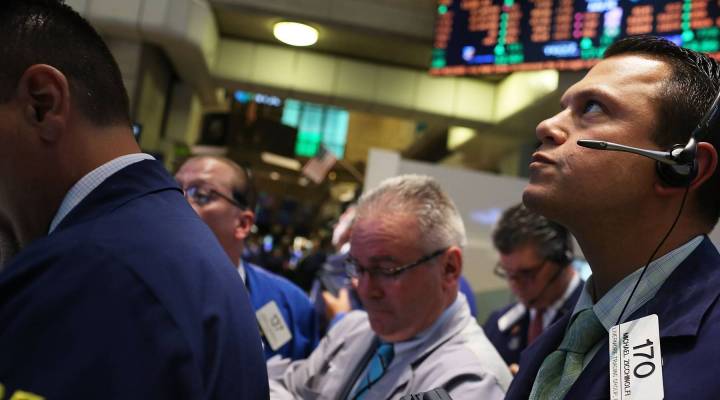 Stacey Vanek Smith: The Commerce Department just announced Gross Domestic Product ticked up 1.5 percent in the second quarter — that down from a growth rate of 2 percent in the first part of the year. GDP is a measure of all of the goods and services the economy produces it’s considered to be one of the most important measures of economic growth.

So here help us make sense of all of this is David Kelly, chief global strategist for JP Morgan funds, he joins us live. Good morning David.

David Kelly: Glad to be here.

Smith: David, 1.5 percent growth are you happy with that?

Kelly: No, I don’t think anybody should be happy with 1.5 growth. Clearly, this economy has the potential to grow much faster than that. But I will say that this number was in line with our expectations and it did revise upwards the last year a little bit. The economy did grow by 2.2 percent over the last year so it is taxing forwards slowly but it certainly isn’t taking off here.

Smith: What about the fact that growth has been slowing down this year? We saw 2 percent growth in the first quarter that slowdown to 1.5 percent is that a concern?

Kelly: No, I think that maybe a degree of statistical noise. We had a bit of a warm winter, if you remember, and often weather disrupts economic activity over the winter, didn’t do that this time round. So we did a little better over the winter 4.1 percent growth in the fourth quarter, 2 percent growth in the first quarter. So a slowdown in more normal spring weather is to be expected here.

Smith: Can we chalk that partly up to the slowdowns we’ve seen in consumer spending and business spending?

Kelly: Well, I think for example, auto sales were quite good in the first quarter – they have slowed down – that’s really what’s slowdown some of the consumer spending numbers. But overall, there is a lot of hesitancy in the economy and people are waiting to see. The problem is that there a lot of confusion from policy makers in the Federal Reserve and the federal government. So there’s a certain lethargy to the economy, that’s really keeping it slower than we’d like.

Smith: We’ve also gotten a lot of company earnings out this week, any signs, economic indicators in there?