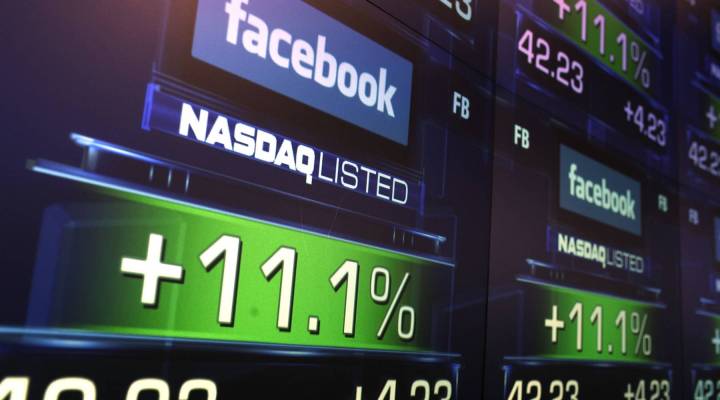 COPY
The share price of newly debuted Facebook stock is seen at the Nasdaq stock market moments after it went public on May 18, 2012 in New York, United States. Spencer Platt/Getty Images

The share price of newly debuted Facebook stock is seen at the Nasdaq stock market moments after it went public on May 18, 2012 in New York, United States. Spencer Platt/Getty Images
Listen Now

Smith: Now, Victor, this is the first earnings report since Facebook went public. What are you going to be looking for?

Anthony: Well, the first thing I’m going to be looking for is their revenues. I think that’s top of the mind for most investors. Typically, when a company comes out for the first time after they’ve IPO’d, it’s difficult to project the expenses they’ll incur in that quarter. And so, I’m being somewhat more conservative on the earnings.

Smith: What about some of the new potential sources of revenue — things like the storefronts, and people voting through Facebook? I mean, are we seeing Facebook expanding in ways that will be profitable, or is it just going to gain momentum through channels it’s already got — namely, selling ads using our profile information?

Anthony: Yeah. So, my long-term thesis on Facebook is — why I’m bullish on the company, irrespective of the numbers they report tonight — I see them adding a e-commerce business. I see them adding a social search business. You know, they’ve also been talks about Facebook being spread into online job postings. So I see a lot of these additional monetization opportunities for the platform.

Smith: You know, one of the reasons that Facebook has been under so much scrutiny is that it valued itself so much higher than its current earnings. Can it really make all of this money that it’s claimed?

Anthony: That’s a good question. And relatively new media companies like Facebook, they tend to be valued at high multiples. As long as they deliver on the growth expectations, I see them expanding, as I stated, into e-commerce and all the additional vertical platforms that’s likely to add to the growth trajectory of the business. So, I’m confident that they’re able to deliver on that growth expectation to justify that multiple that they’re currently trading at.

Smith: Victor Anthony is an analyst with Topeka Capital Markets. Victor, thank you.

Anthony: Thank you very much.