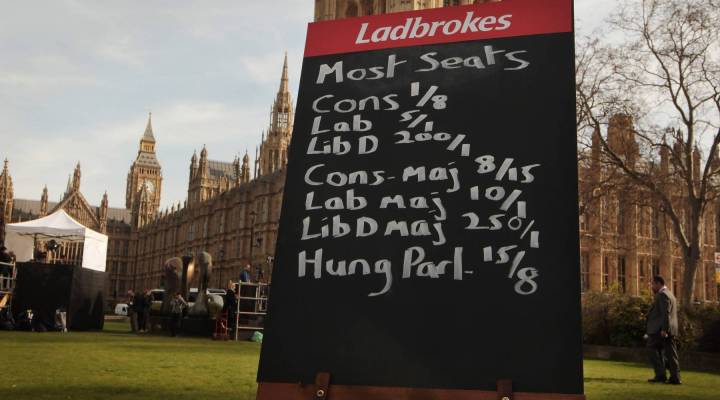 Rain or shine: Betting on the Olympics

COPY
A Labrokes betting board displays the odds on which party will get the most seats in the general election on April 6, 2010 at London's Southbank, England. Now, bookies are taking bets on virtually everything under the sun as the London Olympics get underway. Peter Macdiarmid/Getty Images
London 2012

Rain or shine: Betting on the Olympics

A Labrokes betting board displays the odds on which party will get the most seats in the general election on April 6, 2010 at London's Southbank, England. Now, bookies are taking bets on virtually everything under the sun as the London Olympics get underway. Peter Macdiarmid/Getty Images
Listen Now

Stacey Vanek Smith: The Olympics get underway later this week but the games have already started. People are betting on all things Olympic from the usual bets, like who will win certain events to less usual bets.

Vanek Smith: So Joe, tell me about these bets that people can place.

Crilly: In addition to the sports that we take bets on — we’re betting on every single event in the Olypmics — but we also take a few wacky wages, as we call them, as well that are quite popular with our punters and quite popular with the people in the press as well.

The weather and Britain go hand-in-hand; it’s usually bad weather, despite the fact that we’re in the middle of a mini heatwave at the moment, but we are actually offering 8-to-11, so that’s odds on that rain will fall during the opening ceremony at the Olympics.

Vanek Smith: And that’s that it will rain during the opening ceremony at the Olympics?

Vanek Smith: So how popular are these more unusual bets or how big of a business is Olympic betting?

Crilly: It’s very big indeed because punters only really have the chance to bet on them every four years, they are quite popular. And it also gives fans of peripheral sports, like synchronized swimming, water polo, rowing, it gives them to have a bet on their sports because we don’t usually bet on them throughout the rest of the year. We can very much see turnover at this Olympics, I’d say, being 100 percent bigger than the turnover for the Beijing Games.

Vanek Smith: How much is Olympic betting worth?

Crilly: It’s really hard to put a finger on it because, since the 2008 Games, we’ve brought in mobile betting, we’re offering bets on every single event during the Games, so it’s hard to really put a figure on it, but it will be well within eight figures.

Vanek Smith: Wow, and I do have to ask you about one of your most lucrative bets, I guess if there is one, apparently it involves a UFO?

Crilly: Yes, our punters, if they are looking for the big odds and they are slightly supernaturally inclined, we are offering 1,000-to-1 that a UFO is spotted over the Olympic stadium during the opening ceremony of the Games. So that would mean if you were to put a pound on the very unlikely event a UFO does fly over the stadium, you would win 1,000 pounds from just that one pound investment.

Crilly: Thank you very much.