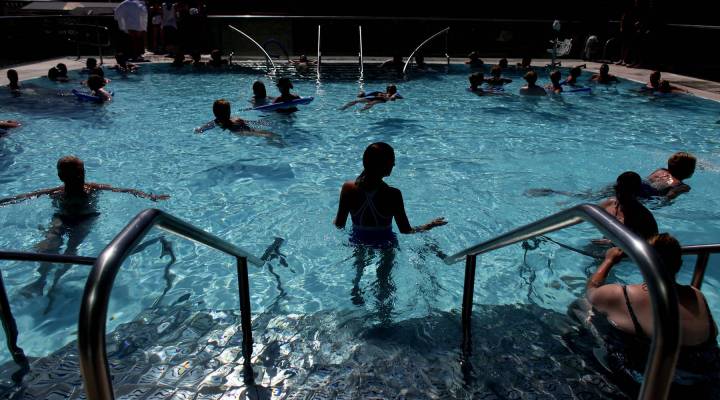 PODCAST: A pool for Olympic betting or Greek prisoners?

COPY
Visitors to the rooftop pool at the Thermae Bath Spa soak up the sun on July 25, 2012 in Bath, England. Matt Cardy/Stringer
Mid-day Update

PODCAST: A pool for Olympic betting or Greek prisoners?

Visitors to the rooftop pool at the Thermae Bath Spa soak up the sun on July 25, 2012 in Bath, England. Matt Cardy/Stringer
Listen Now

What did you know about this whole Libor thing, and when did you know it? That’s the essence of the in-person grilling Treasury Secretary Tim Geithner is getting this morning from the House Financial Services Committee. Geithner has said he was aware of Libor rate-rigging as early as 2007, when he was Chair of the New York Federal Reserve Bank. But it’s less clear what the New York Fed did about it. Meanwhile, Britain’s biggest banks are under pressure to fess up to how much the scandal is likely to cost them. And European lawmakers have proposed making interest rate rigging a crime.

The Olympics get underway later this week but the games have already started. People are betting on all things Olympic from the usual sports bets to less usual bets, like whether a UFO will be sighted during the opening ceremonies.

Nick Symmonds is one of the world’s fastest men — America’s top Olympic qualifier in the 800 meters. He’s also literally the poster-boy for athlete entrepreneurism: Symmonds auctioned off his left shoulder as a billboard. A Milwaukee ad agency paid $11,000 for the space. Nick Symmonds now sports the agency’s logo as a temporary tattoo. But when Symmonds, his tattoo and his money-making message show up at the Olympics — that’s when things get messy.

The Japanese have their own controversial money-making runner. Maya Naka-nishi is a paralympian sprinter, missing part of her right leg. She was out of options to fund her training and afford the latest prosthetics. So Nakanishi posed for her own racy calendar and sold it on Amazon. She made $50,000 and she’s now considered a medal contender at the London Paralympic Games in August.

Reports issued by the US Department of Agriculture don’t usually create ripples beyond a small pond of farmers and investors. Today, though the USDA releases a much-anticipated briefing — the monthly food price forecast. Everyone, from store owners to house husbands, is waiting to see how food costs are likely to be disrupted by the drought that is crippling many corn and soybean farmers.

And back to Europe, an 11-year-old boy boarded a flight from Manchester to Italy yesterday without a ticket, or a passport. He apparently mingled with families at security and at the gate and wasn’t discovered until mid-flight. Airport authorities say they’re looking in to how it happened. No word yet on why the boy got on the flight, then again, do you really need a reason to go to Rome?

Finally, how about Greece? Great time to travel there, maybe not such a great time for everyone else, including prisoners. The phychiatric ward prisoners at Greece’s largest maximum security prison have just gotten a new pool. It had a built-in barbeque and a waterfall and it’s gotta go. The Greek Justice Ministry says the pool was put in without permission and didn’t meet safety standards. But you have to wonder if the new pool for convicts also looked a little extravagant when the rest of the country’s going through a massive economic contraction.