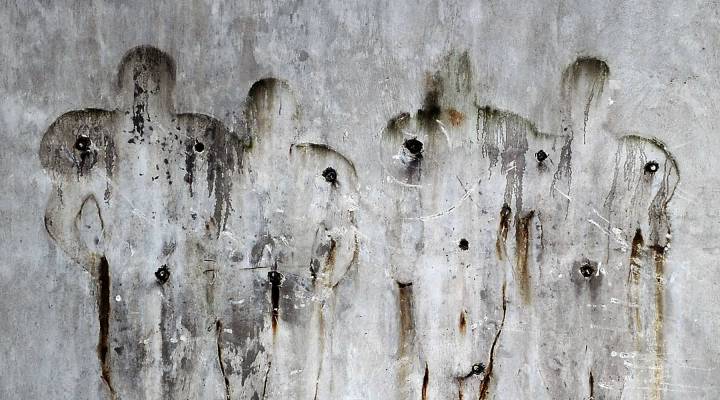 COPY
An area of the statue of former Penn State University football coach Joe Paterno stood sits empty after it was removed by workers outside Beaver Stadium on July 22, 2012 in State College, Pa. As of last weekend, 18-year-old cornerback Ross Douglas was headed to Penn State to play football as a Nittany Lion; he's now de-committed in the wake of the NCAA sanctions on the school. Patrick Smith/Getty Images

An area of the statue of former Penn State University football coach Joe Paterno stood sits empty after it was removed by workers outside Beaver Stadium on July 22, 2012 in State College, Pa. As of last weekend, 18-year-old cornerback Ross Douglas was headed to Penn State to play football as a Nittany Lion; he's now de-committed in the wake of the NCAA sanctions on the school. Patrick Smith/Getty Images
Listen Now

Tess Vigeland: Here’s the word of the day in State College, Pa.: De-commit.

Nobody knows yet how often it will be spoken, in the wake of the NCAA’s sanctions against Penn State in the Jerry Sandusky child sex abuse scandal. But one of its top football recruits, 18-year-old cornerback Ross Douglas, announced his decommitment from the program yesterday. Today, he said he’ll head to Ann Arbor to become a University of Michigan Wolverine.

Ross Douglas: Glad to be on the show.

Vigeland: And his mom, Denise Douglas, is with us as well. Good to have you with us.

Denise Douglas: Thank you. Thanks for having me.

Vigeland: Ross, let me ask you first: What made you change your mind about Penn State over the last, what, 24 hours?

Vigeland: And so you’re now deciding to become a Wolverine?

Vigeland: Yeah. Denise, talk us through the last 24 hours.

Denise Douglas: It was actually very difficult. We had been watching and waiting for actually the Freeh report.

Vigeland: This was the report done by former FBI director Louis Freeh, going through the scandal and what the school had done and not done.

Denise Douglas: Exactly. And once those things came out, we were pretty certain the outcome for Penn State was going to be severe. It was a very, very hard decision because we loved the coaches there, we loved the atmosphere. We felt that it was actually a good fit for Ross. But it was, you know, the program is going to be in sanctions for a number of years, that would stand in Ross’ entire undergraduate career. And looking at that, it just wasn’t a situation that would provide my son with the best opportunity to have a wonderful college experience.

Vigeland: Ross, what has this been like for you, to watch what’s been happening at the school, knowing that it was your first choice?

Ross Douglas: It’s just crazy to see something like this happen to such a prestigious college like that.

Vigeland: Denise, what’s the discussion been like in your family as you’ve been fielding new offers, fielding recruiters in the past week? I would assume that you’ve got grandparents, long-lost cousins, just about everyone sharing their opinion with you.

Denise Douglas: We have certainly shared a lot with our extended family. As a matter of fact, once we did decide on Penn State back in February, we actually spent time purchasing Penn State gear for all of the grandparents. So they all have Penn State gear. So once we’re in, we’re in, and everybody was very excited. But once things started to take a turn for Penn State, our family was calling up and asking us how we were doing, and what’s the next step for us. So everybody was very supportive.

Vigeland: Ross, is this something you talked about with your buddies?

Vigeland: Did you feel pressure from anybody?

Ross Douglas: No, because at the end of the day, it’s my life and I have to make the decision that’s best for me, and they have no control over that.

Vigeland: Yeah. Ross Douglas, as of last weekend, he was headed to Penn State to become a Nittany Lion; now he’s planning to join the University of Michigan’s football program. And his mom Denise joining us as well. Thank you both, and Ross, best of luck to you in Michigan.

Ross Douglas: Thank you, I appreciate it.

Denise Douglas: Thank you for your time.