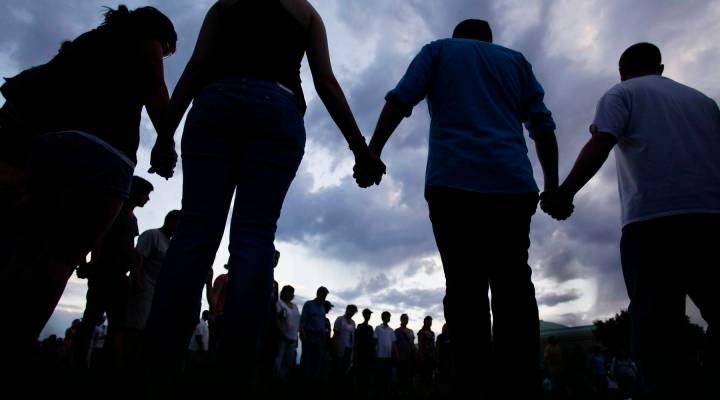 People hold hands as they pray during a memorial service outside the Aurora Municipal Center July 22, 2012 in Aurora, Colo. In the wake of the tragedy, many are questioning the accessibility of buying weapons online. Joshua Lott/Getty Images

People hold hands as they pray during a memorial service outside the Aurora Municipal Center July 22, 2012 in Aurora, Colo. In the wake of the tragedy, many are questioning the accessibility of buying weapons online. Joshua Lott/Getty Images

All eyes are on Colorado right now in the wake of the tragic movie theater shooting. Among the many conversations the incident has sparked is a debate about the accessibility of weapons, including assault weapons like the guns used by alleged shooter James Holmes.

In a recent article on the site Gizmodo, senior staff writer Sam Biddle discovered technology is making it easier than ever to get these weapons, even without a background check. Biddle went to an online weapons store called “The Armory” and says it took just a little bit of computer savvy to find it. He also had to download a special software that makes buyers and sellers very difficult to track.

“Once you have that set up,” he says “You create an an account like you would on any other website, you make a username, a password. You login, and let’s say you want to buy a Glock pistol. You find that like you would on any other website if you were buying shoes, buying a blender, whatever. You pick it out and you have to pay with an online currency called Bitcoin.”

A Bitcoin is an Internet currency you pay for with real money, and it’s another way buyers and sellers stay off the radar. Once the seller is paid, he or she will use a method called stealth shipping to get the weapon to the buyer.

“They typically will disassemble the gun,” says Biddle. “They split it up into many small packages, and ship them separately, so you might receive 15 different envelopes or boxes and you have to build the gun yourself essentially.”

Biddle went to The Armory and posed as someone who was interested in buying weapons for what he called “anti-government operations in a West African Country.” He says sellers had no problem with his order and offered to sell him a heavy bulletproof vest, machine gunes, pistols and even a helicopter, “He said he could maket he right introcutions for a fee,” says Biddle. Why don’t authorities take the site down? They can’t, says Biddle.

“Unlike say Google which has servers that are in a distinct location, they have an address, no one knows where The Armory is located. The only people who know its location are the people who run it. There’s no way to subpoena anyone involved. Everyone is entirely anonymous. There are no names to track, there are no addresses to track.”

The Bureau of Alcohol, Tobacco, Firearms and Explosives said to Marketplace Tech report that it is committed to stopping cyber-weapons trafficking and they start an investigation if they find a firearm has gone from the legal market to the black market.

Wish you could give your long distance sweetie a kiss? Scientists from Lovotics have developed a kiss messaging device called Kissinger. It looks like a ball of bread dough with a giant pair of pink silicon lips on it. You smooch the lips, and the pressure you create is transmitted in real time to your loved one’s set of Kissenger lips. Maybe next they’ll try a virtual handshake for long distance business deals…