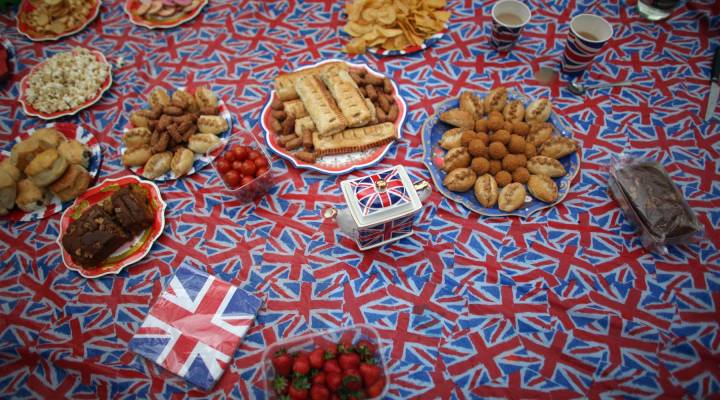 COPY
An afternoon tea party laid out by revelers on the The Mall as thousands gather for The Diamond Jubilee Concert on June 4, 2012 in London, England. Christopher Furlong/Getty Images

An afternoon tea party laid out by revelers on the The Mall as thousands gather for The Diamond Jubilee Concert on June 4, 2012 in London, England. Christopher Furlong/Getty Images
Listen Now

Jeff Horwich: The Los Angeles suburb of Santa Monica is sometimes called “Little Britain.” That’s because of the number of British expats living there.

But “Little Britain” is changing, and that’s putting a strain on one of its most iconic businesses. With more, here’s Bridget Bodnar.

Elsie Smith was there with her husband and daughter, eating scones with a side of strawberries and cream.

Elsie Smith: It’s a meeting place, for British people. You meet your friends, come have a pot of tea.

They’ve been regulars for years.

Across the tearoom is an attached grocery store that sells English chocolates, freshly baked meat pies, and custard tarts.

Stephen Dulley owns the Tudor House with his wife, Teresa. He says they sell products that homesick Brits can’t get in the average American supermarket.

Stephen Dulley: It’s sort of flying to Britain, you can come to Tudor House. This area is quite a British center in that sense.

This area — Santa Monica — has been a magnet for U.K. expats since the early ’60s. Back then, more than four thousand had quit rainy Britain for the sunny skies of Santa Monica.

But that has changed. The most recent Census showed only about 900 British-born people now call the city home.

Annie Shaw is a fixture at the Tudor House. She runs a business reading tea leaves and has lived in Santa Monica for over thirty years.

British people are spreading out in search of more affordable neighborhoods. On top of that, stricter immigration laws have made it harder for British citizens to move to the U.S.

Add in the sluggish economy, and Dulley says the Tudor House has seen revenue tumble.

Dulley: Since the recession, it’s been a very slow climb back. The tea room and restaurant has come back somewhat but the grocery hasn’t come back and unfortunately, one side can’t afford to pay for the other.

In May, the Dulleys announced they’re shutting down the Tudor House.

Dulley: We’re celebrating fifty years this year. Not a very good way to celebrate by closing down but I guess fifty years is a good inning.

The Tudor House serves its last pot of tea this Sunday. Visitors will get a complimentary glass of champagne. It’s a nod to what should have been the tearoom’s Golden Jubilee.