Kai Ryssdal: There are almost 13 million people out of work in this country. But still, you hear companies complain they can’t find job applicants with the right set of talents. Find a solution to what’s called the skills gap, and everybody wins — businesses and people.

Youth Radio’s Sayre Quevedo reports on a company trying to do just that.

Sayre Quevedo: Two years ago, Breyana Scales says she was stuck between a dead end job painting kids’ faces at a theme park while trying to get through college.

Today, however, 23-year-old Scales has a job she loves at the San Francisco-based video game company Zynga, the Willy Wonka’s Chocolate Factory of tech companies. I’m talking arcades, themed kitchens on every floor, and a giant light-up tunnel at the entrance. Her offices are enough to make me lose my composure.

Quevedo: My head is spinning. I feel like it would take me months and months to get over how awesome this space is.

Zynga’s portfolio of insanely popular games includes “Words With Friends” and “CityVille,” which is the project that Scales works on, doing something called Quality Assurance, or QA.

Scales: I had no idea that QA even existed, but once I had the experience inside of the company, then I knew that this is something I really liked to do and this is pretty much my life right now.

Scales says she’s like a literary editor, except instead of reading a book and looking for bad grammar, she plays Zynga’s video games and documents glitches before the games go public. So how did she go from painting faces at a theme park to working in high tech? It was thanks to a program called Year Up.

Gerald Chertavian: We help young adults learn skills in fields we think will be expanding as the economy moves forward.

Gerald Chertavian is the founder of Year Up.

Chertavian: Very sadly for many of our young adults, their potential can often be limited by their zip code, or by the bank balance of one of their parents, or indeed by the color of their skin.

Year Up trains low income 18- to 25-year-olds in nine cities across the U.S. to work in corporate America. The second half of the year-long program is a paid internship at companies like JPMorgan Chase, Wells Fargo, and Google.

Chertavian: We’re able to speak with a senior executive at a corporation and say, “If we could show you a pipeline of pre-trained, pre-screened, cost-effective talent would you be interested?”

But for students to even reach their internship, they first have to complete six months of rigorous classroom training. There, they learn things like IT desktop support and bug reporting in addition to some less technical stuff like how to send professional e-mails, shake someone’s hand or how speak up during a meeting. In other words, Year Up interns learn how to walk the walk — and they wear the right shoes and slacks for it too.

Christian Ramos, 24, is a Year Up intern at LinkedIn. He’s wearing a pressed shirt, gray cardigan and a pink tie. He sticks out among the Silicon Valley techies in their T-shirts and jeans. Ramos is an in-house IT guy. His job is to help LinkedIn employees who have problems with their mobile phones. Standing at his work station, he reads through a job ticket from a worker who just lost his cell phone.

Ramos: There’s a lot of important information there and we need to make sure that we get that cleared up before anyone gets their hands on it.

He’s impressed his bosses. They’ve offered him a job when he completes his Year Up internship next month. And Ramos is loosening up in order to fit into the work hard, play hard culture at LinkedIn — once he transitions to full time work, Ramos says he’s aiming to lose the tie.

Ryssdal: Sayre’s piece was produced by our friends at Youth Radio and their New Options Desk, stories of how young adults can get work. 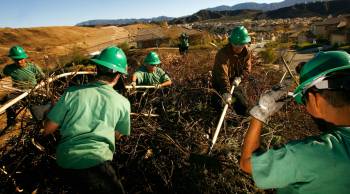