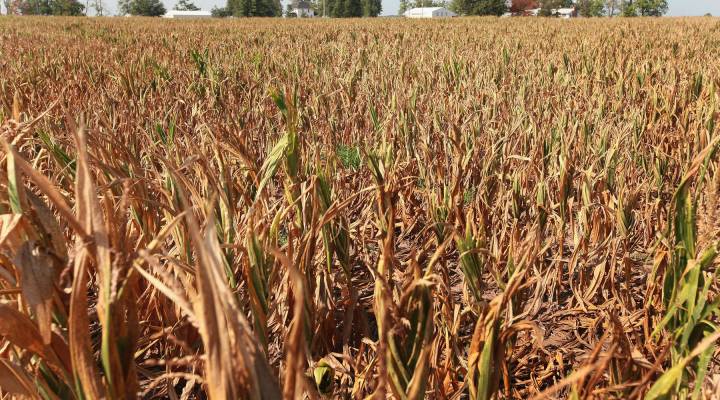 In the worst drought since the 1950s, which is taking a toll on the Midwest, corn and soybean prices are at record levels. That’s already hurting farmers and it could impact all of us soon, in the form of higher prices for everything from cereal to chicken.

Capital One is paying $210 million to settle charges it tricked credit card customers into buying expensive add-on services. No fine for Alec Baldwin, we should say. It’s the first fine, by the way, issued by the Obama administration’s Consumer Financial Protection Bureau.

More banking news: It appears more of the world’s largest banks are getting roped into allegations of fraud. According to this morning’s Financial Times, four big European banks have joined Barclays in the not-so-prestigious club of financial institutions
being investgated for rigging interest rates.

At the United Nations today, the Security Council voted on economic sanctions against Syria. The UN is trying to bring an end to the 16 month conflict between the government of Bashar Al-Assad and rebel forces. The resolution was vetoed by Russia and China this morning, but events are moving quickly in Syria, and other financial efforts to squeeze Damascus continue.

China held a forum with African leaders today. It offered $20 billion in loans to countries throughout the continent over the next three years. That essentially doubles China’s previous aid to Africa. And it strengthens a relationship that has attracted a lot of criticism from the West.

And, be careful what you agree to. The town of Mittenwalde in eastern Germany lent Berlin 400 guilders way back in 1562. The money was supposed to be repaid with 6 percent interest a year. It never was, and somebody kept the receipt, which was just found in an archive. According to Radio Berlin Brandenburg, the debt now adds up to $136 million, but when you adjust for compound interest and inflation it’s in the trillions. Doesn’t look like Berlin is gonna pay, but if it does, the European debt crisis just got a whole lot bigger.