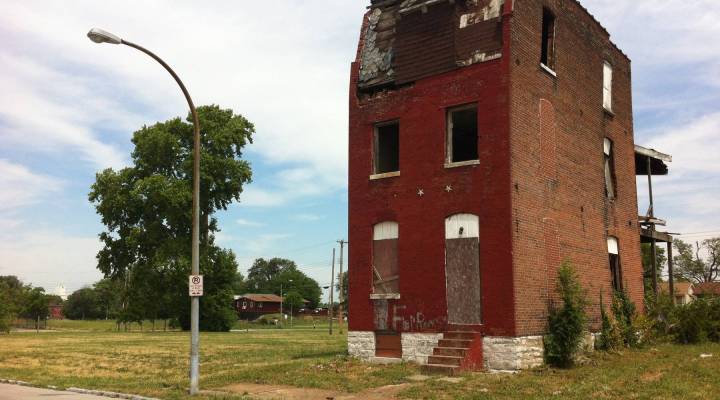 Last month, the Mayor of Detroit made news when he laid out ambitious plans to demolish as many as 10,000 vacant buildings by the end of his term. With costs for maintenance and upkeep running in the tens of millions, many rustbelt cities often find it expedient to simply demolish empty buildings in favor of vacant lots and the hope of future development. But taking down problem properties creates a whole new set of issues which are often overlooked.

In St. Louis, the man who is perhaps most intimately familiar with the after-effects of the city’s housing crisis is Roland Comfort; he’s the building demolition supervisor for the Land Reutilization Authority of St. Louis. LRA is the final destination for abandoned and tax-foreclosed properties.

On a simmering 100 degree morning, Comfort makes the rounds of North St. Louis inspecting homes that have received complaints, either from residents or the city building inspector.

At one two-story brick house on Labadie Avenue, the front porch has fallen off, the brick parapet is crumbling and a side wall has started to lean. Comfort says this home isn’t actually that bad.

“Look around, you could almost close your eyes and you could take down almost any building you see on some streets,” says Comfort.

St. Louis currently holds some 10,000 abandoned properties.  And when factoring those that are still technically under private ownership, Comfort estimates that as many as one-third of the homes in north St. Louis are empty. Comfort questions whether the idea that developers might take a stab at rehabbing these houses is realistic.

He says that LRA only takes down structures that pose a threat to public safety.

But others claim the city is too quick to knock buildings down, like Michael Allen is the Director of the St. Louis-based Preservation Research Office. He claims as many as half the buildings demolished in St. Louis were actually sound under the city’s building code.

“[Over-demolition] is the difference between a fragile neighborhood that can be brought back and a neighborhood that is going to be so diminished that no developer in their right mind would be able to take it on,” says Allen.

Allen points out that financing for large-scale urban development projects isn’t as available as it once was, and knocking down existing housing stock only speeds up the process of out-migration and neglect.

“That’s the direction neighborhoods that are heading.” he says. “When they get out the wrecking ball to deal with larger social problems, there’s still drug dealing, there’s still unemployment, there’s still poverty, there’s still poor housing.  You can take down every last vacant building in North St. Louis, and those are the underlying problems and they are going to remain.”

But across the country, those charged with providing city services until ever-shrinking budgets say cities simply can’t afford the hefty cost to redevelop the worst-of-the worst urban neighborhoods.

“I would say that we’ve got a few areas in the city that are just decimated,” says Detroit Mayor David Bing, who wants to demolish some 10,000 vacant buildings by the end of his term.

At this this point, Bing says Detroit can’t avoid making tough choices. In practice, that means shrinking the city and channeling scarce funding into certain key areas, at the expense of neighborhoods that are beyond fixing.

“And so those areas you’ve got to go and demolish,” says Bing. “There is no way that our revenue stream is going to be able to support what we supported when we had a million or two million people.”

Still, despite the fiscal realities cities are faced with, many worry demolition policies are based more on politics, than on practicality — a chance for cities to clear the land of the urban poor and open up cheap land for developers.

“What’s going to happen is, they’re going to take too many of them out, and then it just becomes land to divide up,” says St. Louis Alderman Sam Moore. Moore represents the historically black Fourth Ward, home to one of the first African-American communities west of the Mississippi.

“In that 845,” says Moore, “is a lot of our history — Chuck Berry, Robert Guillaume, Dick Gregory, Tina Turner, all these people’s houses are in there.”

Moore says he’s sympathetic to residents who complain about crime associated with vacant homes and decreasing property values on otherwise stable blocks. But the response he gives them is that if he took down all the empty buildings in the Fourth Ward, there wouldn’t be a ward left.