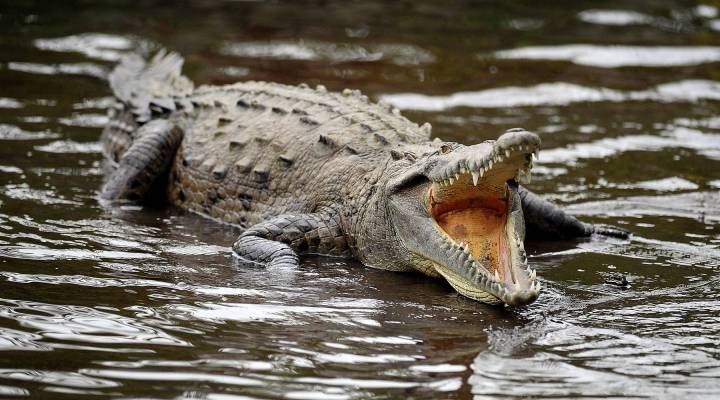 COPY
A crocodile in an antificial pond of a private hotel near La Fortuna, in the Costa Rican rainforest 110 km northwest of San Jose. YURI CORTEZ/Getty Images
Mid-day Update

A crocodile in an antificial pond of a private hotel near La Fortuna, in the Costa Rican rainforest 110 km northwest of San Jose. YURI CORTEZ/Getty Images
Listen Now

In Greece you’d be hard-pressed to find someone who thinks the economic situation is good, but the Pew Research Center managed to do it. In a poll of a thousand Greeks, 2 percent said the country has a good economic situation. Two percent also think the country is headed in the right direction. The survey checked in with people in other countries as well, and the Chinese had the highest satisfaction with their national economy, 83 percent said it was good.

Speaking of super-human feats, engineers from France yesterday displayed a sort of hard drive designed to last 10 million years. The $30,000 device is made of sapphire. The data inside is engraved on platinum. That’s cool, but here’s why they invented it — to tell people millions of years from now what they should know about our nuclear waste.

This morning JPMorgan Chase released its quarterly earnings report, and the big number to report is: $4.4 billion. That’s the new estimate for the size of JPMorgan’s loss from risky trading bets.

In Europe today, the focus has shifted from Spain to Italy, in the ongoing EU debt crisis. Moody’s credit rating agency has downgraded Italian debt to just two levels above junk status.

In Santa Fe, N.M., this weekend, artists from all around the globe are gathering for the world’s largest folk art market. For artisans, the market is a chance to make money, but also receive retail business training and mentorship.

And finally, I’ve got a real estate deal for you, it’s a hotel in the Australian outback, built in 1934, concrete floors, tin walls, and a beer fridge. All for just $760,000. Now, there is a catch. In addition to the hotel guests, who make reservations, there are often some local visitors — freshwater crocodiles and pythons. But the owner says, don’t worry the snakes aren’t poisonous.