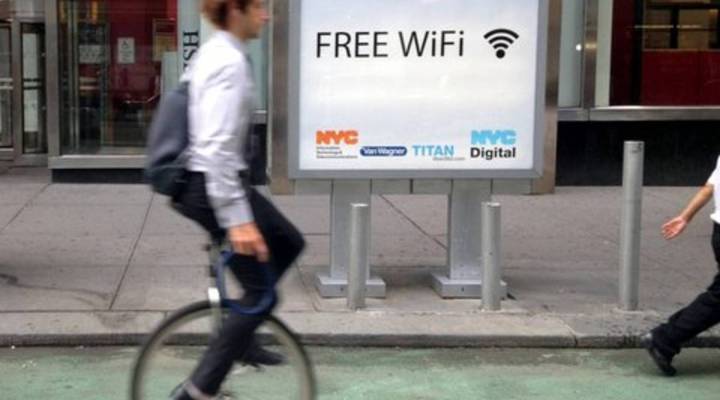 Kai Ryssdal: I was out in Montana last week working on a television thing, and I saw something way up in the northeast corner of the state that I haven’t seen in years.

That once ubiquitous fixture that’s not anymore. In 1999, there were more than 2 million payphones in this country. Today, less than 500,000.

But they’re not all going the way of the buggy whip. New York City started an experiment this week to turn some of its phone booths into free Wi-Fi hotspots. Ah, the irony.

We sent Marketplace’s Stacey Vanek Smith to check it out.

Stacey Vanek Smith: There are 12,000 pay phones in New York City. Ten of them have been outfitted with a Wi-Fi antenna, so passersby can get online for free. A company called Van Wagner owns about a third of New York’s payphones.

Executive Peter Izzo says it costs $2,000 to convert a payphone into Wi-Fi hot spot, but it’s worth it to breathe new life into a dying product.

Peter Izzo: Just by watching the people in the street as they all walk with their heads down with their telephones. We decided to leverage the infrastructure that took us 10 years to build and cost us several million dollars and bring bandwidth to the street corner.

And revenue to Van Wagner, says Izzo. Log on? You might see an ad. Buy something? Van Wagner might get a cut. But why not just get rid of the actual phones?

Rahul Merchant is chief information and innovation officer for the city of New York. He says pay phones still provide an important service to visitors and residents.

Merchant: It would be unfair especially to tourists and a lot of our citizens can’t get access to a phone.

I checked out a Wi-Fi hotspot in Midtown Manhattan.

The Wi-Fi worked like a charm. Using the actual phone was a little trickier.

Actually it ate three of my quarters. But I did get to use the free Wi-Fi, so it probably evens out in the end.

In New York, at the corner of  48th and Madison, on a pay phone, I’m Stacey Vanek Smith for Marketplace.