The City of San Francisco will stop buying computers from Apple.

This in response to Apple pulling out of the Electronic Product Environmental Assessment Tool, or EPEAT. It’s an organization that ranks products on how environmentally friendly they are. Gold, silver or bronze ratings are given out.

Many government agencies and large organizations require computer systems they buy to be EPEAT compliant and may soon follow San Francisco’s lead.

Sarah O’Brien from EPEAT, why did Apple withdraw?

Sarah O’Brien: We don’t really know. We know that Apple’s been a very positive participant in the system and they’ve decided that it’s no longer consistent with their strategy. And we hope they come back and register products again soon.

Moe: Was it a surprise?

O’Brien: It was a surprise. Apple is participating in many of our stakeholder discussions, so we were surprised to see them pull their products from the registry.

Moe: How were they doing in terms of the evaluations so far?

O’Brien: Apple’s been a very high performer. I think, their entire line of products was gold-rated.

Apple didn’t respond to our request for comment. Brian Proffitt from Read Write Web thinks Apple’s withdrawal may have to do with — glue. “Copious amounts of glue that were holding these devices together, especially the new MacBook Pro with Retina display. That glue physically prevents you from getting into the guts of the machine and making any kind of repairs or upgrades or anything like that.”

Which means more money for Apple. Proffitt sayd, “You basically force end users of these devices to stay within the Apple ecosystem of support. So you’re going to have to take your device into either an authorized repair shop, or an Apple store, or mail the device into Apple itself. And that means probably more people are going to be buying those Apple Care support contracts.”

If it can’t be easily repaired and recycled, a device’s EPEAT rating suffers. Instead of getting downgraded, Apple may have chosen to drop out.

Proffitt believes Apple has a backup plan. “I think what we’re going to see is an increase in the marketing of their recycling program that they already have in place. That recycling program is another chance for them to make revenue because you basically turn your device in and you’ll either get store credit for a new device or a discount on a new device. And that affords Apple one final chance to touch base with a customer and possibly make another sale for a new device.”

So in the process of losing sales, Apple ends up making money. Hm.

The Higgs Boson. Up until now it’s been a little thingie that many of us can’t seem to understand.

But now it’s a song as well! And it sounds like Cuban dance music.

Engineers and musicians, working together — which sounds fun — assigned a musical note to each data point that was used in the discovery of the particle.

The Higgs Boson was revealed when researchers detected an anomaly in particle acceleration. Musically, that’s expressed by notes that jump out of the low rhythm.

Now you understand what the Higgs Boson is all about, right? And you get why it’s so important? You don’t? You’re still kind of confused?

Well at least now it has a theme song you can listen to while reading up on it. Listen to it here. 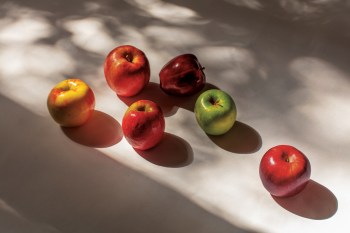