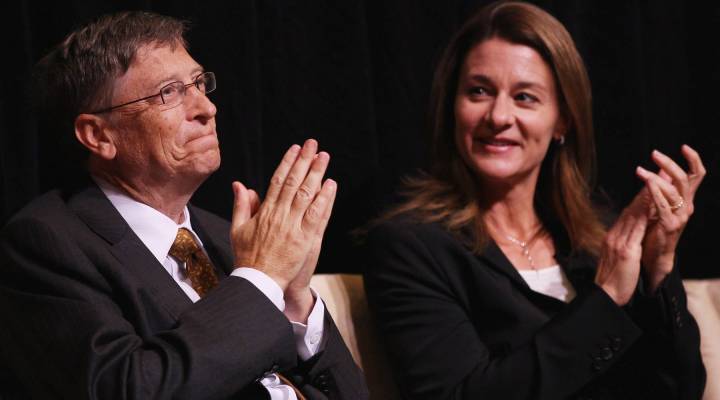 Microsoft Corporation Chairman Bill Gates and his wife Melinda attend a ceremony presenting them with the 2010 J. William Fulbright Prize for International Understanding at the Library of Congress in Washington, D.C. Win McNamee/Getty Images
Listen Now

Melinda Gates, the philanthropist and co-chair of the Bill and Melinda Gates Foundation, discusses why her latest effort is to provide contraceptive options for women around the globe.

Europe markets look likely to close higher. The mood is partially set by announcement of a new deal that’ll send the first bailout money to banks in Spain. In London, the just-resigned CEO of Barclays Bank will give up an expected bonus of about $30 million. He still takes about $3 million in pay and a pension payout.

The Federal Reserve Bank of New York says it had questions about Barclays’ handling of the LIBOR interest rate as early as 2008. More than a dozen banks are still under scrutiny for their possible roles in manipulating the LIBOR rate.

Corruption watchdog group Transparency International released a report today admonishing big business to do more to crack down on corruption. The report slams companies from China and Russia along with American financial services corporations.

Lawmakers in Russia, just a short time ago, voted to join the World Trade Organization. Negotiations have been going on for 18 years. Joining the WTO means Russia needs to cut tariffs and open itself up further to foreign investment.

There are highly advanced attempts at cyber-espionage, and then there’s this. Would-be data thieves in the Netherlands loaded USB thumb-drives with viruses to steal data from the company DSM. Then, they dropped them all around DSM’s parking lot. So the plan works if an employee picks up a thumb-drive and pops it into his office computer. It fails if the same employee instead takes the drive straight to the IT department, which is what happened. Nice try.

And finally, a new study from UCLA, detailed in the Boston Globe, which finds that our lives are getting overwhelmed by clutter. The study says if your refrigerator door is littered with magnets and calendars, the rest of your home is likely to be in a chaotic state as well. Even people who pumped money into outdoor décor rarely relaxed in their own backyards. And most amazing, three out of four garages are now too full of stuff to hold cars.