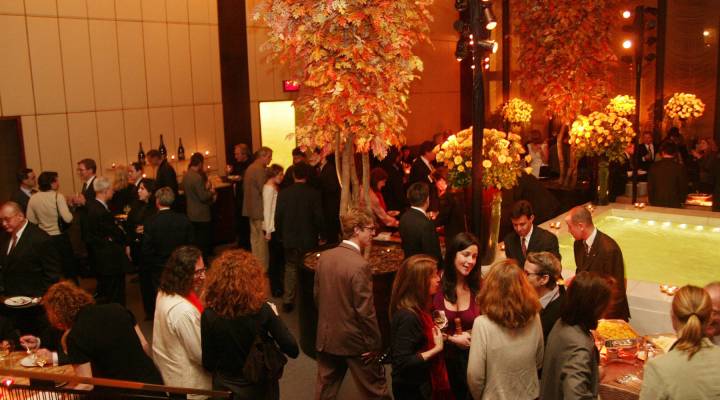 Made in N.Y.: How the power lunch was spawned

COPY
The Four Seasons in midtown Manhattan became a well-known spot for the "power lunch" during the '70s and '80s. Evan Agostini/Getty Images

Made in N.Y.: How the power lunch was spawned

The Four Seasons in midtown Manhattan became a well-known spot for the "power lunch" during the '70s and '80s. Evan Agostini/Getty Images
Listen Now

Kai Ryssdal: Not that it’s any of my business, but what did you have for lunch today? And as long as I’m asking, where’d you have it? At the office, talking shop, probably?

Once upon a time lunch was a break. A chance to get out and recharge. ‘Course, back in the day, movers and shakers did business at restaurant tables as efficiently as they did in conference rooms. But the days of the power lunch — invented and nurtured in New York — may be numbered.

Stacey Vanek Smith: New York has always been defined by work and rushing to work.  All of that rushing and working transformed the midday meal from the leisurely snack it was in Europe into a kind of American sporting event.

Culinary historian Laura Shapiro curated an exhibit on the history of lunch hour at the New York Public Library.

Shapiro: The sight of the people pouring out of their offices, gobbling food, rushing back to their offices. The speed-eating of thousands of people in the middle of the day. That defined New York.

Shapiro says because lunch was all about the clock — going out for a sit-down meal became a status symbol.

Shapiro: You were not grabbing a sandwich on the street and that’s how you knew you had arrived.

The Power Lunch was born. The term “power lunch” was born in 1979 in an article by Lee Eisenberg, the then-editor-in-chief of Esquire Magazine. He was writing about a new lunch scene that had popped up at the Four Seasons in midtown Manhattan.

Lee Eisenberg: Brokaw was there a lot, Henry Kissinger was there, Barbara Walters was there. There was this hushed and smug feeling of self satisfaction that you, in fact, got a table that day.

Alex Von Bitter helped invent the power lunch concept in the late ’70s. He says at the time VIPs and CEOs typically took long, boozy lunches at formal restaurants with table-side preparation and rich food. The Four Seasons had the idea to create a meal that was conducive to doing business. It would be efficient and discreet. The tables were set far apart to give dealmakers privacy.

Everything was light, healthy and easy to eat. Power-lunchers could buy wine by the glass. Writer Lee Eisenberg says it was a totally new kind of working lunch for people who were planning to go back to the office.

Eisenberg: It’s hard to describe how extraordinarily revolutionary it was. You could have a very atisfying lunch in 60 minutes or less at a place like this without sacrificing quality or taste.

The concept was a hit — soon the Four Seasons was booked solid with Manhattan’s movers and shakers.

Von Bitter: It was harder to get tables. We had to start paying attention, who was competing with whom. Who was hot that week, who wasn’t.

The power lunch spread all over the country and started popping up in TV shows and movies.

“Working Girl” clip: I’ve been up here all night working the numbers. I’d like to go over it with you. Are you free for lunch?
“Baby Boom” clip: I set up a lunch for you at the Pierre.
“The Firm” clip: Let’s go to lunch.  Lunch?  It’ll be a working lunch.

But the power lunch has powered down, says Darren Tristano, a food industry consultant for Technomic. Tristano says the expense accounts that fueled the ’80s power lunch have gotten squeezed. And younger executives often prefer meeting in places where they feel comfortable, like places with Wi-Fi.

Darren Tristano: Starbucks could be the place to have a power lunch just because of the way they’re being used by this generation.

The power…mocha? The Four Seasons still sees a healthy crowd of business types, but reservations are easier to come by. Tristano says the power lunch will always have its place — especially in big cities. But he says, the clock is taking lunch back, even for the most powerful.

DINE OR DESK: What’s your definition of a power lunch?