What we have learned from the 1995 Chicago heat wave

What we have learned from the 1995 Chicago heat wave

Sarah Gardner: Here in Los Angeles, it’s a mild 73 degrees today. We’ve been spared the extreme heat much of the country’s been battling the past few weeks. Weather forecasters are warning people in the Midwest and East to prepare for a scorcher this weekend. There have been heat-related deaths but nothing like say, what Chicago experienced back in 1995 when hundreds of people died in a disastrous heat wave.

Eric Klinenberg wrote a book about that called, “Heat Wave: A Social Autopsy of Disaster in Chicago.” Eric Klinenberg, welcome to the program.

Eric Klinenberg: Nice to be here.

Gardner: What is the difference between 1995 and the heat wave we’ve got going on in the country now?

Klinenberg: Well first of all, hard as it is to believe, it’s actually cool this week compared to Chicago in 1995. That week the temperature hit 106, and the heat index — which measures ‘experienced’ heat — went to 126. And the other big thing is that there were no evening cooling to provide that relief.

Gardner: Right, so the 99 degrees that they experienced in Chicago today, that’s nothing.

Gardner: Tell us a little bit about what happened.

Klinenberg: Well what happened is that 739 people in excess of the norm died and thousands more were hospitalized. As it turns out, the mayor of Chicago was on vacation at his beach home, the health commissioner was on vacation at her beach home, the fire commissioner who ran the paramedics group was in Florida. Essentially, the B team was running Chicago during a grade A catastrophe.

Gardner: I read today there have been some heat related deaths in Chicago, but nothing like this. What has changed, if anything?

Klinenberg: First of all, the city in 1995 didn’t do half the things it could have done to prevent deaths. Today we’re far more away of the dangers of extreme heat than we were in 1995. We’re sensitized because of climate change, but also we’ve learned somethings from Chicago and from the European heat wave in 2003, which killed about 35,000 people, according to some estimates. So people are aware about what they need to do and governments do far more.

Gardner: What are governments doing better?

Klinenberg: Many cities have now identified the most old and frail, isolated people, and they reach out to them when the heat strikes. Governments are also working with local media to make sure that they treat heat waves as serious public health issues — no more meteorologists frying eggs on the sidewalk. When you know that there’s a catastrophe that could really kill people, you treat it differently, and now people are getting the word out.

Gardner: What haven’t we done that we should do?

Klinenberg: We have yet to prepare ourselves for a world in which this kind of weather is the new normal. Bear in mind that the heat wave in Chicago in 1995 lasted about three days, the one in Europe that killed 35,000 people in 2003 lasted for three weeks. Right now our power grids aren’t up to snuff. We consume so much energy that many cities see the power go out for long periods of time, that happened in 1995, and it’s happening in many cities across the country this week.

Gardner: You mentioned earlier that we are more aware of climate change now, but I noticed a lot of reporters, they refrain from making a connection between these individual heat events or weather related events and climate change. Are they just being cautions, are they accurate, are they doing a public a disservice?

Klinenberg: It’s impossible to say that any one given heat event is due to climate change. But what the most sophisticated climate studies are showing is that we are seeing far more cases like this, and we’re going to have to find a way to change things because it’s just too much for us to bear.

Gardner: Eric Klinenberg is a sociologist at NYU, professor, thanks a lot.

Klinenberg: My pleasure, thank you. 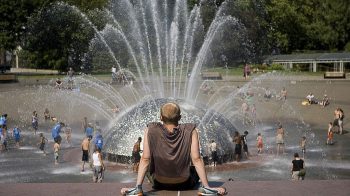