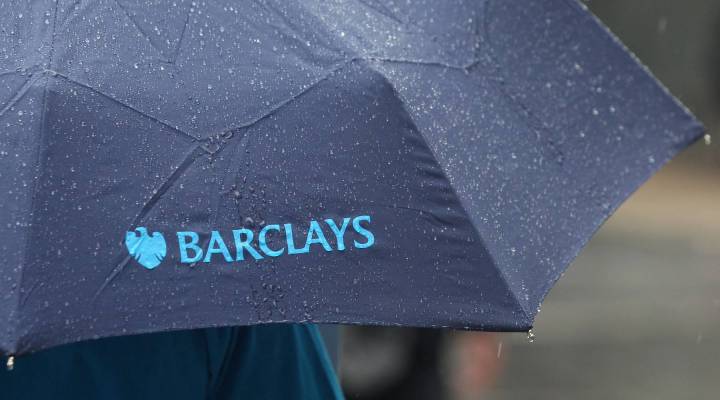 COPY
A Barclays employee helping to direct delegates to the Barclays bank AGM shelters under an umbrella outside the Royal Festival Hall on April 27, 2012 in London, England. Oli Scarff/Getty Images
Mid-day Update

A Barclays employee helping to direct delegates to the Barclays bank AGM shelters under an umbrella outside the Royal Festival Hall on April 27, 2012 in London, England. Oli Scarff/Getty Images
Listen Now

The London-based financial services giant Barclays is accused of rigging the level of a key interest rate; now both is chairman of the board and CEO Bob Diamond are stepping down.

What exactly the LIBOR rate is — and how Barclays and other banks might have monkeyed with it — is no simple thing to get your head around. Let our New York bureau chief Heidi Moore bring you up to speed.

A buddist temple in China where mothers go to pray for the wellbeing of their children is poised for a big stock offering. The Putuo Mountain Initial Public Offering seeks to raise $118 million. Bloomberg News notes that government officials overseeing religion in China recently expressed reservations about religious sites making a profit.

Sources tell Reuters that the Justice Department is also investigating Chesapeake Energy and the Encana corporation for possible collusion in some shale oil land deals in Michigan. The two companies are rivals, but emails reportedly suggest the two companies plotted to avoid bidding against each other. “Time to smoke a peace pipe” with Encana, read one email from Chesapeake’s CEO Aubrey McClendon. No comment yet from Chesapeake.

Finally — call it the “puking penalty,” the “cookie-toss tax,” the “chunder charge…” Starting this weekend taxi drivers in Chicago can tack 50 bucks onto your fare if you lose your lunch in the cab.