Jeremy Hobson: Destructive wildfires continue to burn across Colorado. But officials are being careful in how they describe the blaze.

They don’t want to scare away tourists, as Megan Verlee from Colorado Public Radio reports.

Megan Verlee: Roz Spencer and her husband came to Colorado from Michigan for 25th wedding anniversary. They never expected to spend it at a Red Cross shelter.

Roz Spencer: You know, it was startling, at 1:30 in the morning. They knocked on the door and said, ‘You have to evacuate.’

The wildfire that chased the Spencers from their hotel shut down the entire tourist town of Manitou Springs. The evacuation only lasted a day, but bed and breakfast owner Sallie Clark is worried the economic impact could linger.

Sallie Clark: We already had several cancellations for people several months out. We’ll just have to deal with it because it’s something that’s obviously a big concern for us.

The last time Colorado’s fire season was this bad, tourism companies lost business across the state, not just in the relatively small fire zone. State tourism director Al White says this still a good time to come to Colorado.

Al White: Today’s national headline, in a day or two — once the fire is contained — will drop off of the national attention. But we need to make sure that that doesn’t linger in people’s minds and they have the understanding that, ‘oops, it’s OK now.’

Colorado’s tourism industry is hoping that would-be visitors get the message. But as fire season continues, they’ll have to wait and see what’s left of their business, after the smoke clears. 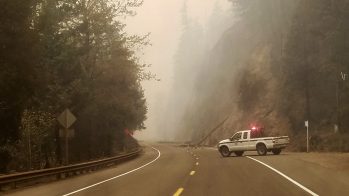 Wildfires are more frequent, getting worse — and straining government budgets