Life after bankruptcy for Vallejo, Calif.

Life after bankruptcy for Vallejo, Calif.

Jeremy Hobson: This week, Stockton, Calif. is set to become the largest city in the United States to file for bankruptcy.

Not a good thing, for sure, but as Marketplace’s Shereen Marisol Meraji reports, there is life after Chapter 9 — Just ask the people 70 miles away from Stockton in the city of Vallejo.

Stephanie Gomes: To just open the books and to show all the problems and admit to them and not defer them and address them, it was a unique opportunity, I think, for a city.

Gomes says Vallejo took the respite from debt to figure out where to cut and ways to boost revenue. And it passed a one-cent sales tax to pad its bare-bones public services.

James Spiotto is a municipal bankruptcy expert. He says bankruptcy is just a band-aid unless cities address their real economic problems.

James Spiotto: With Stockton — the economy, the housing crisis, the need for additional jobs — that isn’t solved by a Chapter 9.

Vallejo’s Stephanie Gomes says four years after filing for Chapter 9, her city is still grappling its biggest problem: the cost of pensions. 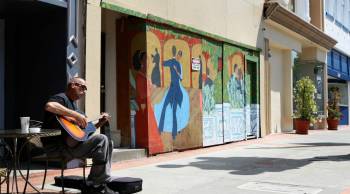