Kai Ryssdal: Back to health care for a bit in this part of the program. The Supreme Court had the final say on the constitutionality of the Affordable Care Act this morning. But that doesn’t mean there aren’t plenty of questions yet to answer, specifically about how the states will implement the thing.

One of the biggest questions is about Medicaid, the state-federal partnership that provides health care to the poor. The court ruled this morning the federal government can’t force states to expand Medicaid by threatening to take away the federal dollars they already receive.

Marketplace’s Dan Gorenstein breaks it down for us.

What the court did today, says Brown political science professor Jim Morone, is give states a choice: Expand Medicaid or don’t.

Jim Morone: The huge question is what happens to the states that have always been reluctant to cover its Medicaid population.

Bruce Greenstein: We don’t believe the model is set up for success. We made a very strategic decision about that. We didn’t want to bear very high costs for the state.

Greenstein’s counterpart in Wisconsin says no decisions will be made in his state until after the November elections. Basically, these states are concerned about money. In Florida, for example, 28 percent of the state’s budget already goes towards Medicaid. That could climb to 40 percent under the health care law.

This sets up a new battle, says Jim Morone of Brown.

Morone: The sleeper in this is public hospitals, the urban hospitals and the primary care physicians will fight very hard now for the expansion of Medicaid. So you have a very serious lobby in many states.

Of course, a quarter of states are already on board. For example, California has moved quickly to comply with the law. Peter Lee is the head of the California health insurance exchange, which will help the uninsured buy coverage. He’s had a party in the works for awhile.

Gorenstein: How much a bottle now?

While the controversy will certainly continue, at least in California, there’s plenty to celebrate. 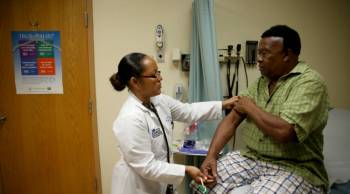