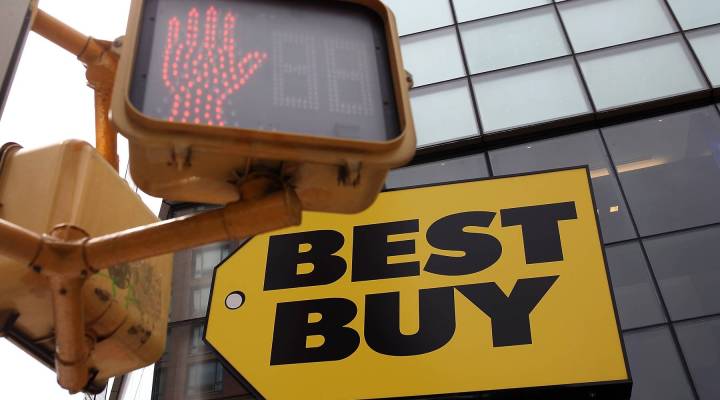 COPY
A sign is posted in front of a Best Buy store on April 10, 2012 in New York City. Justin Sullivan/Getty Images
Mid-day Update

A sign is posted in front of a Best Buy store on April 10, 2012 in New York City. Justin Sullivan/Getty Images
Listen Now

The consumer electronics giant Best Buy wants to avoid the fate of its former rival Circuit City, which liquidated in 2009. So the company’s founder and largest shareholder Richard Shulze is reportedly considering taking the company private and giving it a makeover.

The luxury homebuilder Lennar reported this morning that it had a 40 percent jump in orders for new homes last quarter.

Oil futures down 0.3 percent so far today, and that’s no surprise. Oil prices are down about 25 percent in the past few weeks.

Tomorrow’s big European Union summit on the debt crisis; ahead of it, the German Chancellor Angela Merkel threw cold water on the idea of shared European borrowing. She said there wouldn’t be Eurobonds quote: “as long as I live.”

Here in this country, we’ll get earnings today from General Mills. Its signature cereal Cheerios has been America’s most popular for more than 60 years.

To Rhode Island, where an obscure 1989 law has been repealed. The law made it a crime for anyone in Rhode Island to lie on the Internet. About anything. The head of the Rhode Island ACLU said the law made virtually the entire population of Rhode Island a criminal. Telling fibs may be wrong, he said, but it should not be criminal activity.

A week ago Microsoft placed a big bet on its upcoming tablet computer, called the “Surface.” Today founder Bill Gates reminds us — sort of odd timing — that tablets are not the solution to everything. He was talking to the Chronicle of Higher Education about giving tablets to students around the world. He goes on to say that tablets are great for reading stuff, but not so much forwriting. For that, you really need… Guess what? A good old-fashioned PC.

To London, where the huge iconic clock tower known as Big Ben will no longer be known as Big Ben. Big Beth may be more appropriate. It’s being renamed Elizabeth Tower to mark Queen Elizabeth’s 60th year on the throne. So I guess that means this little piece of Hollywood history from National Lampoon’s European Vacation is about to become a relic.