How U.S. immigration law compares to other countries

How U.S. immigration law compares to other countries

Jeff Horwich: The U.S. Supreme Court has struck down much of Arizona’s undocumented immigration law, but it upheld the so-called ‘show me your papers’ provision. Of course, every country on earth has immigrants and all those immigrants have papers of some sort. So how does the rest of the world handle this?

David Bartram is a sociologist at the University of Leicester in the UK. He’s a specialist in international migration. David, welcome.

Horwich: So the part of Arizona’s immigration law that was allowed to stand is that authorities can check your papers if they stop you for some other reason. And here this is quite controversial. On a global level, is this sort of requirement that immigrants have to have their papers on hand?

Bartram: Well in many countries it’s not just immigrants it’s everyone. When you don’t know whether somebody is an immigrant, you have to be able to establish if they are. Many people in countries, even in Europe, have a formal requirement to carry identity papers, and it is pretty normal. It’s also just not so common to have all sorts of immigrants.

Horwich: In general the approach in Arizona, including the parts of the law that were struck down, focused on the individual — made it a crime, for example, to attempt to work if you are undocumented. Has this individual centered approach worked well in other countries?

Bartram: Well I would say it hasn’t. I mean that’s really one of the big differences between the U.S. and Europe. I wouldn’t say that there aren’t undocumented immigrants in Europe, there’s certainly the numbers, the percentages are much lower. And generally the reason would be they focus enforcement efforts on the employers, not so much on the individuals.

Israel has tens of thousands of undocumented workers and asylum seekers. And they too are taking this approach of insisting that people have papers and asking people for papers especially if they look like they are not Israeli and locking people up and deporting them where they can.

Horwich: And what’s an example of a country that takes something other than an individual centered approach?

Bartram: So in France, for example, if you are convicted of employing an undocumented worker, you can get a really big fine or you can even go to jail. If you think about the way businesses, especially agricultural businesses, lobby for government policies to their liking, it makes a lot more sense. In the U.S., there just is much less of a willingness to take that approach.

Horwich: Professor David Bartram at the University of Leicester, thank you very much. 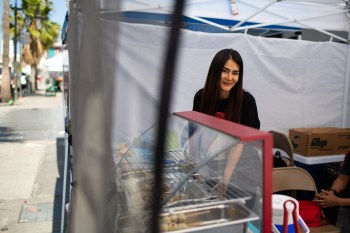