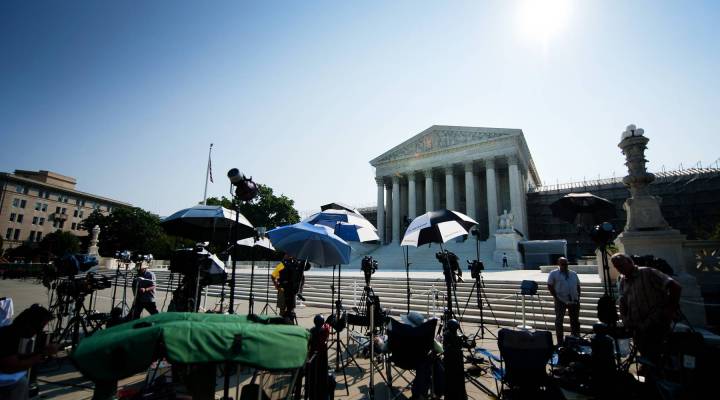 COPY
Members of the media camp outside the U.S. Supreme Court June 21, 2012, in Washington, D.C. as the Supreme Court is expected to hand down its ruling on the Healthcare Reform Law before the end of its 2011-2012 term. JIM WATSON/AFP/GettyImages
Mid-day Update

Members of the media camp outside the U.S. Supreme Court June 21, 2012, in Washington, D.C. as the Supreme Court is expected to hand down its ruling on the Healthcare Reform Law before the end of its 2011-2012 term. JIM WATSON/AFP/GettyImages
Listen Now

The EGX30, an index of Egypt’s biggest companies, is up almost 7 percent today.

The stock of drug maker Pfizer is down this morning after failing to gain approval from U.S. regulators for a blood-thinning drug. Regulators want more information.

Greece’s lenders *had* planned a visit to the country today, but wouldn’t you know it: the brand new finance minister’s been fainting and sick to his stomach. One day on the job — that’s all it took to send this man’s body into revolt. Have a joke? Tweet it with the hashtag: #CrisisJokes

There’s a new settlement related to the Bernie Madoff ponzi scheme. But this one doesn’t involve people who invested with Madoff directly. It’s about a money manager named Ezra Merkin – who has agreed to pay more than $400 million to his former customers who lost billions – when he invested their money with Madoff.

The winner at the box office over the weekend – was the Pixar movie Brave…which brought in $66 million. The movie is the first Pixar film in which a female is the main character.

A report out today from Bankrate.com says almost half of Americans don’t have enough money saved to cover themselves for even three months.

While we wait for a Supreme Court ruling on healthcare… The big question in the U.K.’s high court is whether Subway’s meatball marinara sub has to be heated up before it’s eaten. If it does, the government argues – it should be subject to a tax. But Subway says it needs to heat up the sandwich for food safety reasons. A decision is expected… Sometime after lunch.

With more Americans switching to tablet computers to watch movies or play video games… The Electric Power Research Institute wanted to know what that would mean for electricity consumption. Well it turns out – the annual cost to charge an iPad is a dollar 36. Far less than a desktop PC – which will cost you 28 dollars a year in electricity bills.