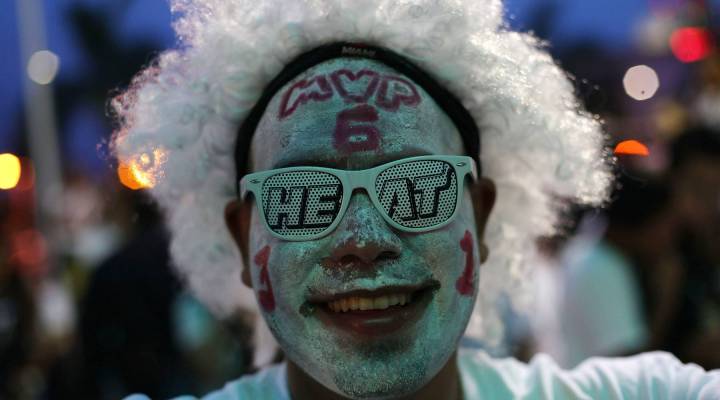 COPY
Julio Gomez shows off his face paint as he poses for a portrait before game five of the 2012 NBA finals between the Oklahoma City Thunder and Miami Heat at Havana Nines June 21, 2012 in Miami, Fla. Joshua Lott/Getty Images
Mid-day Update

Julio Gomez shows off his face paint as he poses for a portrait before game five of the 2012 NBA finals between the Oklahoma City Thunder and Miami Heat at Havana Nines June 21, 2012 in Miami, Fla. Joshua Lott/Getty Images
Listen Now

After U.S. markets closed yesterday, the rating agency Moody’s delivered more bad news — this time to 15 of the world’s largest banks, including the biggest American banks.

Best’s Buy CEO said yesterday he’s got a plan to turn the company around that involves making sure customers aren’t coming in to stores to test out products — before going home to buy them from other retailers online.

The Miami Heat won the NBA championship last night in just five games. Pulling this super team together in Miami has obviously been huge for that city, and you have to presume it’s put plenty in the team’s pockets.

The price of gold is down 4 percent this week, which could be gold’s worst week of the year.

What item that you carry with you all the time would stress you out the most if you lost it? Well according to a new study, your wedding ring is not number one: 77 percent said losing a mobile device would stress them out more. The only thing worse than that, according to the survey would be losing a wallet. Then again, the survey was done by the tech company Intel — so take it for what it’s worth.

And finally, to a study out of the U.K. that finds 60 percent of people wake up grumpy in the morning. The biggest causes are a bad night’s sleep… Or the dread of a tough day at the office.