Kai Ryssdal: OK, wrap your head around this one if you can. A couple of weeks ago the OECD — that’s the Organization for Economic Cooperation and Development — issued a report that said more than half of American companies are having trouble finding enough skilled workers to hire. That’s with 8.2 percent unemployment. We’re doing worse than Germany, China, England and Canada.

And get this: the skills gap — as it’s known — has actually grown in the past five years, in spite of more people looking for work and ever-more Americans walking around with college degrees and trade school certificates.

Mitchell Hartman: Where you hear about the skills gap most is in high-end manufacturing.

Darlene Miller: This is one of our CNC multi-axis lathes.

The kind of factory where the floors are squeaky-clean and the machines are run by computer.

Miller: We have job openings. The people are not trained for the jobs that are open today.

Elaine McDevitt: Ten years ago, it was a lot easier to find welders with a lot of skill. Not just a welder that said he was a welder, but welders that could do the type of welding we need. People are coming out of school not with the math skills that they used to.

Gardner Carrick at the Manufacturing Institute has the numbers on this for 2011.

Gardner Carrick: Over 80 percent of manufacturers were having a moderate or serious shortage of skilled production workers. Over 600,000 jobs were open in manufacturing because companies were unable to find qualified applicants.

Really? With so many Americans looking for work? Many of them middle-aged — presumably they got a decent education back when such a thing was possible.

Peter Cappelli: I think a lot of employers are just being irrational about this.

Management professor Peter Cappelli at the Wharton School is what I call the ‘big skeptic’ on the so-called ‘skills gap.’

Cappelli: If employers really are willing to leave a position open for months and months while they keep searching, rather than spend a week or so training somebody, or, just give them a week or so of ramp-up time, they’re doing something wrong.

Basically, Cappelli thinks employers are just being cheap. He says this is something they learned from the downsizing of the 1980s. It was so easy to snap up laid-off workers somebody else had already trained. So then companies downsized their own training programs to save money.

Cappelli: This is sort of like saying, ‘My pants don’t fit anymore. The problem, I believe, is that the fabric is shrinking.’

Carrick: It’s a clever analogy, but I think that in some regards, it misses the point.

Carrick: Nobody expects a hospital to take someone just out of high school or just out of college and train them to be a nurse or a doctor. Why is it that manufacturing are the ones that are expected to do all the training of their workers on their own?

It should be easy enough to check whether the amount of time and money companies spend training their workers has fallen. Except, no one tracks this comprehensively.

The best estimate comes from the American Society for Training and Development. It finds spending-per-employee has been essentially flat for a decade, even as the skills required by new technology in the workplace have gone up.

So let’s go back to the employers we started with, the ones with job openings they can’t fill for skilled workers they can’t find. Darlene Miller at Permac Industries says she’s committed to training. But new hires need machinist experience and advanced math, first.

Miller: We need people who can come in and be value-added the day they start.

And she’s guilty of the sin Peter Cappelli talked about: holding out. She searched two years for a machinist to run a new shift at the plant — she says it was worth the wait to avoid costly mistakes.

Elaine McDevitt in Reading, Pa., wishes she could do more to train people up.

McDevitt: Now, the marketplace is so competitive, the margins are just so tight. So maybe when we say we can’t find experienced people, it’s because we don’t have the monetary resources to put into training from scratch like we used to.

And which employees do companies provide with the most skills-enhancement? According to the training organization’s data, it’s not production workers, or customer service reps or new employees. It’s supervisors, managers and executives. 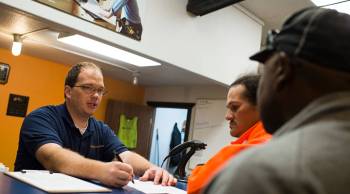 Strong job market, but not so much for workers with mid-level skills