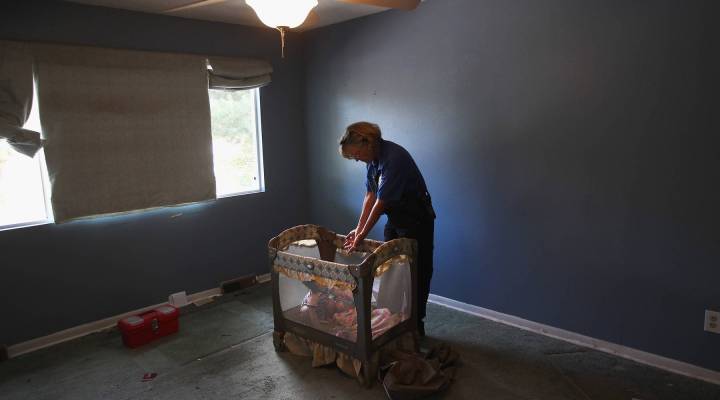 The cost of fighting home foreclosure

The cost of fighting home foreclosure

Kai Ryssdal: There was some talk of the housing market at Mr. Bernanke’s press conference this morning. Mostly regret on his part that it hasn’t come back faster. And for all the recent indicators that we might have bumped up against a housing bottom, hang on just a second.

There was news last week that foreclosure filings look like they’re scooting back up again. Given that houses are the biggest purchase most people ever make — and where possible, we’d like to hold onto ’em — today’s installment of Money Matters, our regular series on consumer finance, explores the costs of fighting foreclosure.

Stacey Vanek Smith: Martha Wright lives in the beach town of Avalon, N.J. Her house is on the bay — she built it — in a vintage barn style more than a decade ago.

Martha Wright: Come on in!

Although Wright had a high-paying job as a marketing executive and a strong credit score, she ended up with a subprime mortgage loan for more than $750,000 from Washington Mutual.

Wright: My mortgage was originally a Jumbo No Doc loan. A liar’s loan.

When Wright’s salary got cut in half four years ago, she refinanced, but still had trouble making payments. Since then, Wright has spent countless hours fighting to stay in her home — filling out forms, getting documents ready and sending them to the JPMorgan Chase, which now services her loan.

Wright has also retained a lawyer. She hasn’t made a monthly mortgage payment in more than two years.

Homeowners like Wright can also be responsible for the bank’s legal fees as well as property inspection fees, says Sara Manaugh, an attorney with South Brooklyn Legal Services in New York.

Sara Manaugh: That charge will be on there for every single month they’re in foreclosure. And some of those fees can really add up because in a lot of states foreclosures go on for a really long time.

Nationally, the average distressed homeowner is delinquent for nearly two years before losing their house-that can be longer in states like New Jersey, where foreclosures have to be approved in court. And all that time carries a personal cost, says Wright.

Wright: It’s the depression, it’s the limbo, it’s the ups and the downs. It’s the ‘I’m making contact with somebody, I’m making progress.’ It’s two steps forward, you think, and then all of the sudden, it’s four steps back.

Chase told Marketplace it is committed to helping homeowners modify their loans.