Americans of all ages, all stations of life, and all types of disposition are forever forming associations. There are not only commercial and industrial associations in which all take part, but others of a thousand different types — religious, moral, serious, futile, very general and very limited, immensely large, and very minute. … In democratic countries knowledge of how to combine is the mother of all other forms of knowledge; on its progress depends that of all the others.

Charitable giving — a critical part of the desire to associate — rose slightly in 2011. Probably the right way to phrase it is charitable giving hung on even though some major players retreated.

It increased by an inflation-adjusted 0.9 percent from 2010 to $298.4 billion, according to the Giving USA: Annual Report on Philanthropy. The gains were driven by giving by individuals (0.8 percent inflation-adjusted increase) and bequests (8.8 percent in real dollars). Giving by foundations (-1.3 percent) corporations (-3.1 percent) and religion (-4.7 percent) were down. (You have to register but you can download a free copy of the executive summary for free on their website. ) You can see the cumulative inflation-adjusted giving from 2009 to 2011 in this chart.

Individual giving really stands out, especially since these are years when the typical family struggled to reduce debt, boost savings, and hang on to a job with the unemployment rate averaging more than 9 percent.

Longer term, inflation-adjusted giving has fallen 9 times since 1971, typically in the years surrounding a recession.

Charitable giving adds up to 2 percent of real gross domestic product, down from a recent peak of 2.3 percent in 2001. It’s striking how stable charitable giving is over the years throughout business expansions and contractions.

We don’t get irrationally exuberant with our giving during the good times and we avoid withdrawing from the market during bad times. It’s almost as if there is a natural rate of charitable giving in the country in the aggregate.

Chart of the day: Charitable donations from the rich are way up 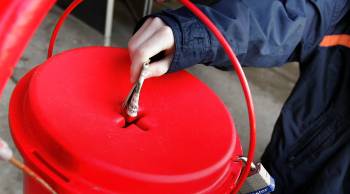 Have you benefited from charitable giving?

Charitable giving dips in the wake of tax law changes