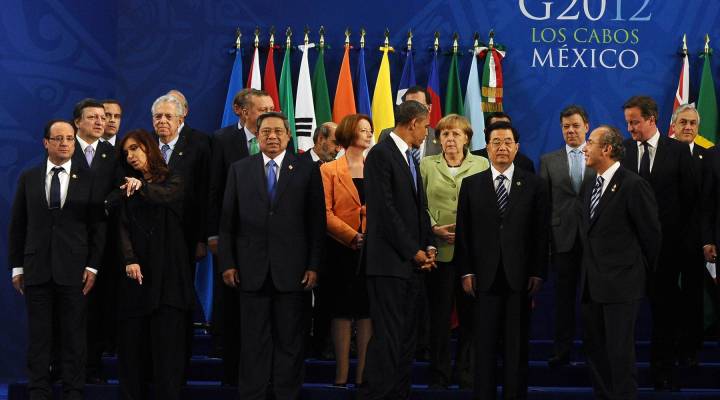 COPY
Heads of the G20 leading economies take their positions after arriving for the family photo of the G20 summit, at the convention center in Los Cabos, Mexico, on June 18, 2012. JEWEL SAMAD/AFP/GettyImages
Mid-day Update

Heads of the G20 leading economies take their positions after arriving for the family photo of the G20 summit, at the convention center in Los Cabos, Mexico, on June 18, 2012. JEWEL SAMAD/AFP/GettyImages
Listen Now

News this morning that the drug store chain Walgreen’s will spend almost $7 billion buying a stake in Alliance Boots, which runs more than 3,000 health and beauty stores around the world.

Twenty heads of the world’s leading countries meeting in Mexico plan to issue a statement all comity and solidarity later today. They’ll pledge unity to boost global growth, and to stop short any meltdown in Spain or anywhere else.

If yesterday was all about Greece, today belongs to Spain. Concern about Spanish banks has pushed the government’s borrowing costs over 7%. That’s a level that knocked other smaller European countries like Greece over the edge.

Google has put out its latest “transparency report.” It includes details of all the “takedown requests” the company received from governments around the world. Leading the pack: The government of India, which sees lots of YouTube content with the potential to inflame regional and ethnic tensions. But that’s a little misleading because China simply blocked Google itself for large chunks of the year.

In India as in many cases, it’s remarkable how often Google did not comply. One request came from Canada. Evidently they had a problem with a YouTube video of a Canadian citizen urinating on his passport and flushing it down the toilet. Google’s response: the video stays.

To Lima, Peru, where there’s a real-life Superman. Now, Avelino Chavez can’t fly — but he does dress up as Superman every day and makes about $160 a month at it. He bought a blue shirt, and his cousin sewed him a cape and some red tights about 15 years ago. His crime fighting resume is a little thin though. It’s been ten years since he’s recovered a stolen purse.