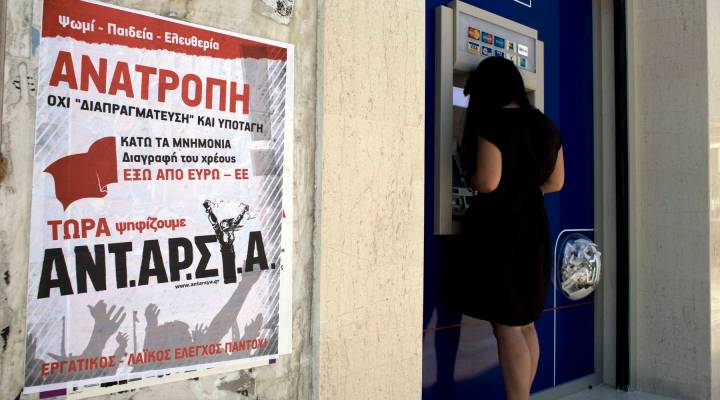 PODCAST: Greece holds on, an ATM lets too much go

COPY
On the heels of Greece and Spain, Cyprus formally announced its request for a bailout from the euro zone this week. Milos Bicanski/Getty Images
Mid-day Update

PODCAST: Greece holds on, an ATM lets too much go

On the heels of Greece and Spain, Cyprus formally announced its request for a bailout from the euro zone this week. Milos Bicanski/Getty Images
Listen Now

We’ll start with Greece, where voters elected pro-bailout, pro-austerity political leaders to take power and form a coalition government in the coming days. Some economists worried that if the vote had gone the other way, we’d be facing an economic crisis. That didn’t happen — but the celebration by investors was very brief, if you can call it much of a celebration at all.

If you are the child of a baby boomer, don’t expect any inheritance checks. A study out today from U.S. Trust says boomers are about 20 less inclined than adults under the age of 46 to to leave money to their kids.

To Detroit, where a dream we’ve all had came true for one man. He went to the ATM and it allowed him to make unlimited withdrawals. Whatever he wanted. All told, according to Detroit’s Local 10 News, the guy withdrew $1.5 million. Problem is, the ATM was in a casino, and it didn’t take him long to gamble it all away. Every last penny. Bank of America figured out what had happened and the man faces 15 months in prison.

Now to a very popular job opening. According to the Wisconsin State Journal, more than a thousand college seniors apply every year. Only twelve spots are available. The job is to drive Oscar Mayer’s Weinermobiles which are just what they sounds like: 27 foot long hot dog cars. The lucky drivers have to go to a three week hot dog boot camp, where they learn to say things like: “Have a bun-derful day.” And “Frank you very much.”

From the U.K., we have a new form alternative energy. It’s people. I’m not talking Soylent Green here: researchers have developed a snap-on device to harness the power of our knees. Every step charges a generator that you might use to power something like a GPS unit. Now that’s what I call “power walking.”