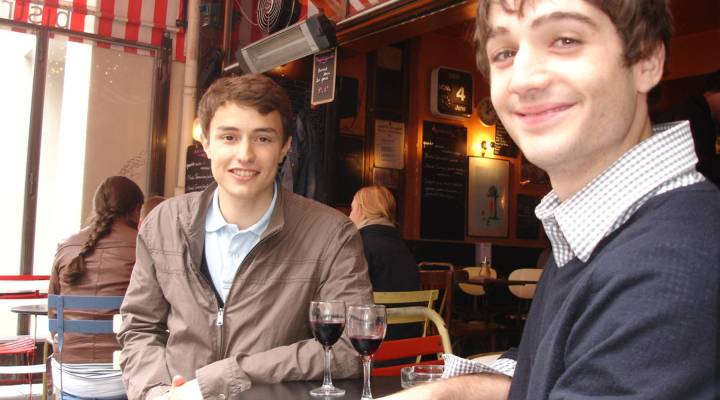 Eurozone pub crawl: How Europeans feel about the crisis

COPY
Business student David Carraso (right) with fellow student Pierre Renauld at a bar in Paris. The young Frenchmen were very optimistic even in the light of the on-going financial doom and gloom. Stephen Beard/Marketplace
Pub Crawl

Eurozone pub crawl: How Europeans feel about the crisis

Business student David Carraso (right) with fellow student Pierre Renauld at a bar in Paris. The young Frenchmen were very optimistic even in the light of the on-going financial doom and gloom. Stephen Beard/Marketplace
Listen Now

Is the world financial system about to go up in smoke AGAIN? Feels like this warning crops up every six months or so. The upcoming vote in Greece has pundits here in a panic. They all seem to think the universe is about to end. But we wondered what Europeans think.

So we sent our man in London, Stephen Beard, on a pub crawl through Europe to find out what they think and what they drink across the pond (Stephen said he only got two drinks in during his trip). He went to Ireland, Athens, Paris, Berlin and Madrid to “check out this horror story of the eurozone debt crisis at grass roots level.”

Unsurprisingly, he found different attitudes among the different countries.

“Anger in Ireland, dismay in Spain, some surprising generosity in Germany,” he told Tess. “In Greece, the worst-affected by the crisis is in its fifth year of recession, I found a lot of resignation and despondency. Most people who are suffering the worst effects of the downturn are innocent.”

Take a listen to the interview above to hear more about different Europeans and their feelings about the current and future states of their countries.