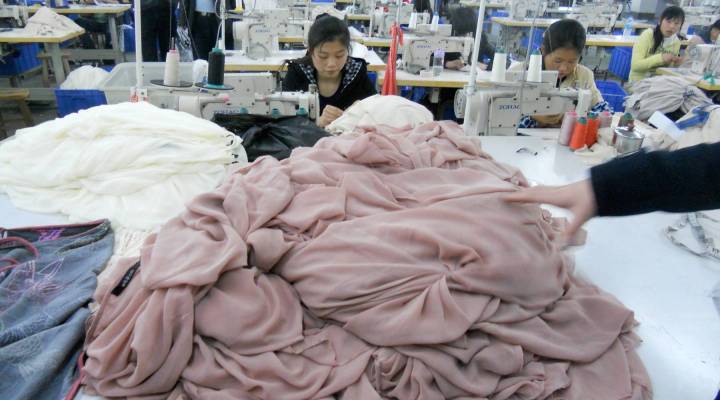 The high price of cheap clothing

The high price of cheap clothing

Stacey Vanek Smith: Americans spend an average of $1,100 a year on clothes. That’s less than a laptop and a lot of that is spent on so called “fast fashion” — super cheap clothes in the latest cuts, and it’s the subject of a new book by Elizabeth Cline called “Overdressed.”

I caught up with Elizabeth in New York’s fashion district where she gave me a tour of some local fast fashion outlets. We began the interview near a Kmart. The store is the setting for a personal story in her book.

Elizabeth Cline: In the summer of 2009, I was actually in a Kmart on Astor Place, which is in Manhattan, and walked in and saw that a pair of shoes that I liked was on sale for an astonishing $7-a-piece, and I ended up clearing the entire store out of my size. So I bought actually seven pairs of shoes that day.

Vanek Smith: And what happened to the shoes?

Cline: Oh you know, they fell apart within a couple of weeks, and I think that actually they went out of style before I could wear them all. I’ve still got a couple of pairs clogging my closet.

Vanek Smith: How did you get from there to wanted to write this book because it sounds like you are consuming the way that a lot of us are right now?

Cline: Right, I started looking into it and realized that Americans are now buying a little over one garment per week, so it’s not just me. I think most Americans are trapped in this cycle of buying a lot of clothing for very little money. And I really just wanted to delve into why that is and what’s happened in the fashion industry that’s created this situation.

Vanek Smith: And it does seem that especially right now since the recession, there has been such a huge focus on sales and markdowns and fashion being cheaper than ever — how does that affect the industry right now?

Cline: People should be looking at clothes as an investment, I think that’s what’s different about this recession is that you would think that people would say, I actually want to spend my money on something that is going to last. But instead, it’s just made us more deal-conscious and we have become even cheaper. And I think part of the reason why is because we have really killed off the middle market of the fashion industry over the last 10 to 20 years. So I see where consumers are coming from because there aren’t a lot of options out there anymore.

Vanek Smith: What does that mean for consumers? If someone is maybe interested in changing the way that they shop, what’s a good way to start?

Cline: Well, there are so many different things. Just a handful would be supporting local designers, designers when they are starting up — honestly, they don’t have the capital to produce overseas, so a lot of them are producing in our communities — so support them, help them thrive. I would say also people should use their tailors and their seamstresses in their community, get your shoes repaired, take care of what you own. And lastly, I would say take that $1,100 a year, that American’s spend on average on clothes, and buy less but just invest your money in things that are a little bit better made.