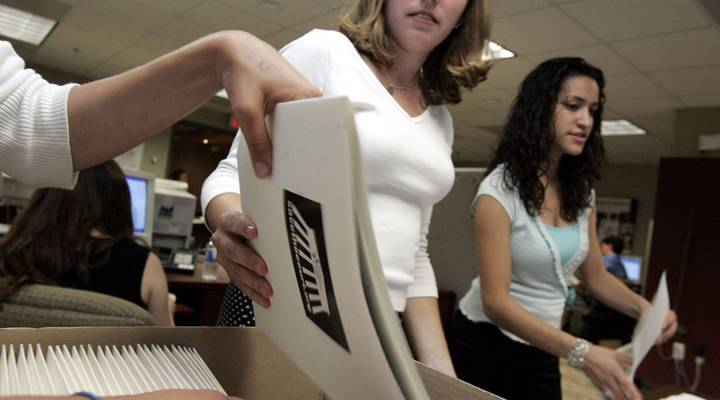 Summer marks the end of the school year and the beginning of internship season. Students are looking to collect as many resume bullet points as possible. So instead of working on summer tans, they’re working in offices. Which is better for them anyway!

For some tips on how to make the most of an internship, we’ve invited the self-proclaimed “Intern Queen” to our L.A. studios. Her name is Lauren Berger and she has a new book out called “All Work, No Pay.” And Lauren really is the Intern Queen — she had 15 internships under her belt by the time she graduated. While they were mostly unpaid — which is a subject unto itself — she says she greatly benefited from keeping her summers chock-full of them.

“With each opportunity, I learned more and more about myself, what I wanted to do with my future and I definitely learned how to excel in an internship,” Berger told Tess.

She gives tips on how to be the best intern ever, along with explaining how a company can make an internship rewarding for the intern. Take a listen to the audio for her insights.

Tess Vigeland: It has been exactly 25 years since my first internship. So while we’re on the subject, why not try another one? And why not do it in Hollywood at one of the coolest shows on TV, “The Soup”? With my new boss supervising producer Hathaway Loftus.

Hathaway Loftus: This is Tess, our intern.

Vigeland: Hello. Nice to meet you.

Boyd: …the intern for the day?

Loftus: Yes. So Edward is our executive producer.

Vigeland: Right. Just let me know if you need some coffee.

Loftus: This is Matt Carnian, he actually helps out a lot with the interns and making sure they’re doing their jobs.

Matt Carnian: And I once was an intern here.

Loftus: He was. He started as an intern and is now a producer.

In fact, four of the show’s 14 staff members started as interns. That, of course, is one of the reasons to intern. It might land you a job. In fact, my first — of four — was at Oregon Public Broadcasting, after my freshman year at college. They actually put me on the air. And when I graduated three years later, they hired me. So full disclosure — I believe in internships. We’ll find out later whether I get hired at “The Soup.”

Loftus: It is! I mean, you can only so many hours of “The Today Show” and “The View” before you wanna throw up. But the point is we give you guys those shows, so that you can find stuff and we don’t have to watch them anymore.

“The Soup,” for the uninitiated, is a clip show of absurd and outrageous videos from across the TV spectrum. So I, and two other interns, spent the rest of the morning watching really REALLY bad TV.

Vigeland: OK, I’m just gonna go through a couple things. See if I can find anything for you?

Vigeland: And then for the pitch meeting, you have to be able to make a case for your clip?

Loftus: You pitch it. You tell the group why you think it was funny. So if you wanna step in…

Vigeland: OK, I will start watching.

It was Anthony Troli’s first day as an intern, too. He’s 19, goes to the University of La Verne.

Anthony Troli: I’ve only started watching one show and I’m a little bit into it…

Vigeland: What show is it?

Voiceover on “When Vacations Attack”: Fortunately, his pals all stepped out of the way, so the tree was able to stop him.

Troli: It’s been horrifying some of this stuff, but it is entertaining.

Vigeland: So have you found any clips yet?

Troli: Yeah. I found one clip.

Vigeland: That you’re going to pitch?

Troli: Yeah, well I don’t know if I’m going to pitch it yet.

Vigeland: What are you hoping to get out of this?

Troli: I want to be a writer. So, hopefully, be consistent enough to where I’m taken seriously and someday get a job, at least get glowing recommendations.

Vigeland: What are you watching?

Eliana Levenson: I am watching “Mysteries at the Museum.”

Eliana Levenson started her internship at “The Soup” three weeks ago. She’s 20 and goes to Barnard College.

Levenson: It’s all about artifacts that you might find in a museum.

Vigeland: Is it hilarious?

Levenson: It is overdramatized, which makes it funny when you’re watching the whole show.

Voiceover on “Mysteries at the Museum”: Wagons that once rode the Oregon Trail, steam-powered locomotives and a cannon that pre-dates the Civil War are just a few of the artifacts housed in the Kansas Museum of History in Topeka, Kansas.

Levenson: But clip-by-clip, it’s not always the funniest. But you get a great history lesson.

Vigeland: What are you hoping this internship does for you?

Levenson: I actually also want to be a writer. So I’m hoping to get a feel for the way that a big company runs, you know, be able to use it as a springboard of not only knowledge, but contacts that when I graduate in two years, I’ll be able to say, “Hey, remember me? I interned for you. Hire me please, so I don’t live on the streets or back home.”

Loftus: Hey Anthony, will you bring one of those chairs from the avid over here?

Both Levenson and Troli said their parents are supporting them while they work for corporate America, free of charge. Internships at “The Soup” are, like many if not most other internships, unpaid. And that aspect of the intern world sparks debate pretty much every year around this time.

But a study two years ago by the National Association of Colleges and Employers showed that new college grads who did internships were more likely to get job offers than those who didn’t.

Vigeland: OK, I have chairs. Where do they go?

Vigeland: Oh no. Did I screw up already?

Yes, part of my job as “The Soup” intern was to set up chairs for the pitch meeting.

Executive producers K.P. Anderson and Edward Boyd, along with the rest of the staff, gathered around a long conference table to watch what was supposed to be the very best of the day’s viewing, including a local TV news clip where one anchor is clearly not listening to the other.

That one made the final cut, as did clips from my two fellow interns. But me?

Boyd: “When Vacations Attack,” no. Oh “Lion’s Den,” the last one. And then none of the other ones. You failed us NPR!

Vigeland, fake crying: Give me a couple of days.

Boyd: You will not get college credit for this radio show.

Good thing that first internship 25 years ago turned out a little better.