The Federal Reserve and interest rates

The Federal Reserve and interest rates

Question: There is an implication by those in the media that the Fed is essentially out of tools when it comes to lowering interest rates. Can the Federal Reserve lower the fed funds rate below zero? If so, what would be the implications for borrowers, savers and the macroeconomy? Richard, Marietta, GA

But not as much as it sometimes appears. For example, the Fed can create a negative “real rate” under certain conditions. Two quick definitions: “Real” means adjusted for inflation and “nominal” means the stated rate. So if the fed funds rate is at zero (nominal) and inflation is running at 2.5 percent, the real rate (inflation-adjusted) is below zero. In other words, if the Fed’s nominal rate is at 0 percent and the inflation rate is 2.5 percent, then the real rate of interest is -2.5 percent. The Fed could lower the real rate of interest by pushing for a higher rate of inflation — say, 3 percent (for a -3 percent real rate). Among others, it’s an approach that New York Times columnist and Nobel laureate Paul Krugman has written about favorably.

Even more importantly, the Fed has a number of other monetary tools at its disposal. A good example is the central bank buying long-term securities from investors — say, 10-year and 30-year Treasury bonds and mortgage-backed securities. It’s a way of lowering long-term interest rates and it was a key tactic in the Fed’s so-called “quantitative easing.” The real limit on monetary policy is imagination and a willingness to entertain unorthodox approaches. By and large, it has been the approach of Fed chairman Ben Bernanke, especially when compared to his peers elsewhere in the central banking world.

The goal of lowering rates is to get people to take at least some of their money earning a measly 0 percent and put it at risk to, say, buy a house. That, in turn, means movers will get hired, some furniture will get bought and so on.

Economic conferences these days are full of discussions on various creative techniques the Fed could use to support the economy. I don’t buy the perspective that the Fed is essentially out of tools. What I do think is right is that the Fed could use some help from the fiscal side of the government’s ledger. A classic example here would be a dramatic hike in infrastructure spending. It’s why Bernanke in his Congressional testimony this week called on Congress to do more.

Odds are, savers won’t make much on their money for a considerable time to come. 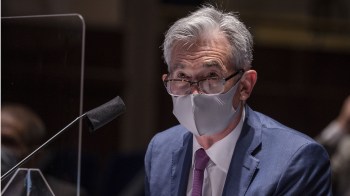 Fed: Rates to stay ultra-low even after inflation picks up